McIlroy and Lowry closing up shop until the new year 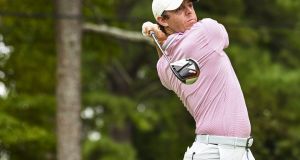 Rory McIlroy brought his consistency to a new level through the year. Photograph: Keyur Khamar/PGA Tour via Getty Images

Their work for the season done, Shane Lowry and Rory McIlroy plan on packing away the clubs for much of the winter before returning to competition on different dates and some 12 time zones apart in January: for Lowry, his defence of the Abu Dhabi Championship will mark his seasonal return; for McIlroy, it will be the Farmers Insurance Open in San Diego, California.

What’s sure is that the two players – almost certainly playing as team-mates in next year’s Olympics in Tokyo – will head into that new season with considerable confidence on the back of exceptional play for much of this season.

“I’ll try not to touch my clubs for the rest of the year,” remarked McIlroy after finishing up at the DP World Tour Championship, where the 30-year-old Northern Irishman claimed his 19th top-10 finish of the season.

McIlroy brought his consistency to a new level through the year. The breakdown shows that he had four wins, two seconds, one third and a further 12 finishes between fourth and 10th. In playing 25 tournaments in 2019, he missed two cuts – one at the Memorial, the other (painfully) at the British Open – and, if there was any real downside, it was that his Majors drought extended to a fifth year without one of those prized trophies.

‘Enjoy the sun in Florida’

“I’ll take a nice four- to five-week break (from golf) and then in the New Year I’ll start getting ready again and playing in the last week in January . . . I’ll really just try and get away from it and maybe do a bit of gym work, sort of enjoy the sun in Florida for a few weeks and enjoy Christmas at home (in Belfast) with my parents,” said McIlroy of closing up shop for the rest of the month and in December.

With Jon Rahm wrapping up the Race to Dubai order of merit title with his victory in the season-ending DP World Tour Championship, the new 2020 season gets under way straight away with the Alfred Dunhill Championship at Leopard Creek in South Africa.

Cormac Sharvin, who earned his full tour card through this year’s Challenge Tour, and recent Qualifying School graduate Jonathan Caldwell are the two Irish players in the field.

The tournament in South Africa – co-sanctioned with the Sunshine Tour – has the stage all to itself this week after the European Tour cancelled the scheduled staging of the Hong Kong Open due to civil unrest in that territory. It means the early part of the 2020 season will take in just three tournaments, the Alfred Dunhill Championship, the Mauritius Open, and the Australian PGA Championship.

There are loose plans to perhaps stage the Hong Kong Open early in 2020, but that is contingent on an end to the civil unrest. As European Tour chief executive Keith Pelley remarked in taking the decision to cancel this week’s tournament, “as the safety of our players, staff, stakeholders and everyone involved in each and every one of our tournaments around the world is out top priority, we feel this is the correct, but unfortunate, course of action”.