Nicky English: Cork’s hurling should suffice once they avoid a physical dogfight 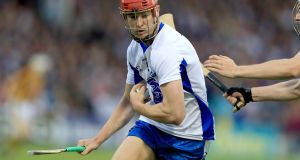 Tadhg de Búrca: his absence is a major blow for Waterford as no-one else on the team is as comfortable in performing the role he has perfected. Photograph: Donall Farmer/Inpho

The suspension of Tadhg de Búrca is critical to this match. There are two aspects to the situation. One, how do Waterford cope?

We saw them take on Cork without a sweeper in June and it looked like it didn’t suit them. Tadhg de Búrca was chasing Conor Lehane and he was left and right and ultimately very poor on the day.

Since then Waterford have improved and played better against Kilkenny and better against Wexford, in their familiar formation – call it a sweeper system. They’re crowding the middle third and De Búrca is sitting back off the centre forward who is being picked up by Darragh Fives.

It will be difficult to pick someone else to play that role. Tadhg de Búrca has a great positional sense, is a brilliant striker and is excellent under the high ball and plays there extremely well. I presume Fives will be asked to do the job but the truth is they have no-one as good to take over.

I have no doubt that they’re going to line up that way because the match against Cork in Munster spooked them.

The second aspect is how Waterford are dealing with the situation.

Very quickly after Brian O’Meara was sent off in Tipperary’s 2001 semi-final against Wexford there was an appeals process but we spoke with Brian and the players and said, ‘this is over, lads; he might be back or he mightn’t but as far as you’re concerned this is over and he’s gone’.

You go through the processes but it’s a parallel universe. It doesn’t become a crusade for the team and the manager and if it does, with a sense of injustice eating away at everyone, that’s a big negative and will undermine a team regardless of whether the suspension is lifted or not.

Looking at the public statements from Waterford it doesn’t appear to me that this has become a cause, which will serve them better.

On the field they will have benefitted from the historic win over Kilkenny and they were comfortable against Wexford but at the end of the day they don’t create a whole lot of goal chances.

They’re also very dependent for attacking impact on the veteran players. Brick Walsh was hugely influential in the first half and Kevin Moran scored 1-3 but we’re still waiting for the younger players to raise their threat levels.

Jake Dillon and Shane Bennett are going to work themselves into exhaustion and then get replaced but who will do the scoring? Work ethic is all very well but someone has to punish the opposition and it’s hard to see Waterford putting up the 2-23 or 3-20 you need to be sure.

Cork beat Waterford fair and square in Thurles. Was that because Waterford changed their formation or because they looked very short of energy? There was a suggestion that they had trained very hard in Fota et cetera, et cetera and in any event they had been 11 weeks without a match.

I think Cork need to be wary because it was in the semi-finals last year that Derek McGrath freed up his players to play a less inhibited game and they came incredibly close to beating Kilkenny. How will they approach this?

There’s no question that they’ve improved since June. They’ve more matches played and if they can draw Cork into a physical battle around the middle third they have the wherewithal to beat them.

I felt my theory that hurling has evolved into a faster-moving, less physical game this year took a knock last week with Tipp and Galway serving up a heavyweight contest very much in keeping with the previous two years. It set me wondering whether it’s in fact Cork alone who have embraced that style. If so, bear in mind that three of the four semi-finalists from 2015 and ‘16 have lined up for this year.

When Galway lined up last week it wasn’t with pace in mind but power.

It was a physical battle and, if the same happens this week, Waterford are better supplied for that. Cork will need to play the evolved game they played in Munster, utilising the speed of Darragh Fitzgibbon and Mark Coleman and Lehane and Luke Meade because if they get bogged down into a middle-third battle they just might not win it.

Last week’s heavyweight contest will have encouraged a Waterford team who have campaigned in that division for the past two years and if Cork are drawn into abandoning their light-heavyweight style, Derek McGrath’s team will have the physical edge.

But the big opportunity for Cork is that Croke Park is made for their game. They are also a confident and consistent outfit at this stage. Remember they went to Walsh Park in the league and beat Waterford. They’ve been underdogs in both matches played between the counties this year and, as Galway showed last week, league form isn’t easy to overturn.

Cork will also move the ball more quickly and in Mark Ellis and Damien Cahalane they have a defensive spine that has looked a lot more solid this year. They’ll have plenty of ball at the back because of the way Waterford set up and they showed against Clare that they can take advantage of that.

They are also more likely to land punches with the rising form of Alan Cadogan in the provincial final adding to the established threat of Lehane, Horgan and Harnedy.

Cork also have the experience of three years ago when Tipperary hammered them at this stage when they were last Munster champions and they’ll have learned from that. Unless their performance levels drop, I think they’ll win this.

1 Eamon O’Shea: ‘We spent quite a bit of time talking about older people rather than to older people’
2 Monica Seles: The warrior queen who could have been the best ever
3 Matt Williams: Six Nations must recognise the desire for revolution outside Europe
4 Billy Morton’s Santry Stadium a beacon for sporting endeavour
5 Sport crosses its fingers yet again as ministerial merry-go-round gets another spin
Real news has value SUBSCRIBE

Brighton see off doomed Norwich to edge closer to survival 15:09
Eamon O’Shea: ‘We spent quite a bit of time talking about older people rather than to older people’ 08:00
The Best of Times: Ireland women’s hockey team’s World Cup fairytale 07:00
Michael Walker: Ian Baraclough staying on trend, from Sligo to Windsor Park 06:00
Matt Williams: Six Nations must recognise the desire for revolution outside Europe 06:00
Crossword Get access to over 6,000 interactive crosswords