Waterford might not have enough to close the gap 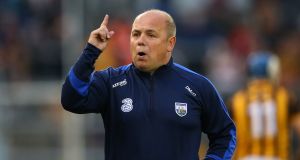 Derek McGrath’s Waterford have been much better since losing to Cork in the Munster championship but there are still good reasons to believe that for all they could improve, it might not be enough to close the gap. Photograph: Cathal Noonan/Inpho

In a disrupted week with the focus on today’s ’s GAA All-Ireland hurling semi-final firmly on the committee room rather than the field, this has crept up on us a little.

It is hard, however, to concentrate when the fate of one of the contestants’ best players is in the balance.

The irony hasn’t been lost that having varied the tactical prescription against Cork in the Munster championship, Waterford failed to thrive with Tadhg de Búrca playing a marking rather than a sweeping role whereas now after his suspension was upheld, they won’t have him at all.

The consensus is that Darragh Fives will slot into that free role and he will be effective but who takes over from him as the marker?

Kieran Bennett, older brother of Stephen and Shane, is named to start but the local belief is that ultimately he will be a front-eight player.

It could be Kevin Moran or Austin Gleeson, which would allow Maurice Shanahan or Brian O’Halloran to come into the attack.

This view is supported by the reluctance to introduce replacement backs during Waterford’s campaign to date.

Of the 22 substitutions made to date just three – two if you exclude Darragh Fives who was returning from injury – have been out and out defenders and one of them, Stephen Daniels is injured.

It is really hard luck on Derek McGrath to reach Croke Park again only to lose his defensive linchpin. But like any team with a well-rehearsed system they have the structure to cope. There is also the precedent that the team hit by a distance their best form at this stage last year.

For a young side they also have solid experience at this level whereas Cork haven’t been here for three years and that proved a nightmare.

Kieran Kingston’s team have earned universal plaudits for the slickness and dynamism of their hurling, combing some wonderful young talent with dazzling pace and a formidable range of scoring forwards.

To what extent have the teams learned from their match in June and what improvements can be made?

Cork will reflect on the fact that they could have had goals but for Stephen O’Keeffe’s outstanding saves. Some of the rookies who had starred against Tipperary in the first round didn’t have the best of days although the unstoppable Mark Coleman was the exception. They will ask more of themselves this weekend.

If anything Waterford have more plausible fixes at their disposal. They were ring-rusty in June after a three-month break and routine assumptions like Pauric Mahony’s free taking proved fallible on the day. He wasn’t the only one and 16 wides was evidence of the slack shooting that compounded their problems.

Gleeson also had his least effective performance of the summer and if suspension isn’t exactly the way they would have wanted to address de Búrca’s rough afternoon with Conor Lehane, they have been well warned about the urgency of countering him.

Waterford have been much better than that in the interim but there are still god reasons to believe that for all they could improve, it might not be enough to close the gap.

There is perceived to be an advantage for a team in taking on a side that has beaten them previously in a championship but interestingly it hasn’t applied in the case of these counties who have had two double-ups of province and All-Ireland in the last 15 years.

In both cases the team that won the first day, did so again in the next encounter: Waterford in 2007 and Cork two years previously.

Cork have the game for Croke Park, the pace and the sureness of touch. They also have dangerous forwards, who haven’t misfired to date and above all they have sufficient experience of what went wrong as Munster champions in 2014. It may be closer than expected given de Búrca’s absence but Cork should still get there.

1 Dundalk in dreamland after hitting €3m Europa League jackpot
2 Champions League draw: Manchester United handed tough draw on return
3 Filippo Giovagnoli soaks it all in as Dundalk march on to join the big fish
4 Arsenal reward for Anfield win is home quarter-final with Man City
5 Leo Cullen: ‘It feels like it all came crashing down on top of us’
Real news has value SUBSCRIBE