September Road: Carving up the championship may not be the answer

Armagh’s Caroline O’Hanlon is worth the wait, the Graham family’s unique record 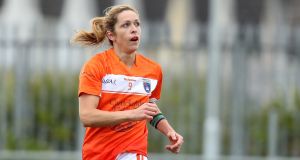 Armagh’s Caroline O’Hanlon scored 5-2 in the opening half and 7-4 overall for her club. Photograph: Oisin Keniry/Inpho

The calls for a tiered football championship grow louder, it seems, each week, with many commentators referring to the tiered system in hurling as proof that such a format would work in the big ball game.

The latest was former Kerry footballer Mike Quirke, who noted in his Irish Examiner column this week: “Hurling has a tiered championship structure which regularly pits teams of even enough ability against each other and mismatches are a rarity.”

Is this true? Well, despite the fact that there are now five grades of adult inter-county hurling, mismatches (let’s say games decided by 10 points or more) are common. Five of the seven Lory Meager Cup (tier five) games had 10-point margins while the average gaps in the Ring and Rackard Cups was 11.3 points.

How does this compare? In the All-Ireland SFC, 27 matches were decided by double-score margins, equating to 41pc. In the bottom four tiers of hurling, that rate was actually 48pc, although it drops to 38pc for the entire hurling championships when the Liam McCarthy is included.

So, if the aim is to end mismatches outside of the elite, simply carving up the championship may not be the answer.

Hats off to whoever decided to post a video on YouTube last week of Limerick manager John Kiely accepting a county Junior B championship cup back in 1995.

The timing could not have been better and the video has been viewed almost 10,000 times to date.

“All the junior teams, if they think they will have an easy ride from Galbally, they have something coming to them,” said then-county board official Brendan Danaher, who presciently pointed out that Kiely was “the first Galbally man to wear a Limerick jersey in Croke Park and it will be the first of many green and white jerseys that John will wear.”

True to form, Kiely’s speech was brilliant, too.

The Graham family possess possibly a unique record in Breffni football circles. Mickey, the eldest, won Ulster Under-21 and senior medals with Cavan as a player and managed junior and intermediate championship winning club in the county before crossing the border to Longford.

His younger brothers Paul and Andy both won Ulster minor and Under-21 medals too, and all three have county senior medals with their club Cavan Gaels. So, the whole set resides in the household - club junior, intermediate and senior and provincial minor, U-21 and senior medals.

Armagh footballer and Northern Ireland netball star Caroline O’Hanlon had an eventful evening on Thursday. Running late for an Armagh Ladies SFC semi-final for her club, Carrickcruppen, against Crossmaglen, she just made it to the venue on time.

While others may have been forgiven for playing their way into the contest, O’Hanlon - who has been a familiar voice on the airwaves this summer as well - proceeded to bag 5-2 in the opening half and 7-4 in total as her side defeated Cross (who featured Jamie Clarke’s sister Alex) by 11-15 to 1-5.

“@boomjayo must be getting excited. Only a few weeks more and he can tweet again” - Anthony Moyles throws a rub at Jason Sherlock.

White flags raised by Dublin in seven SFC matches this summer for an average of 21.7.