Signs positive for an intriguing league 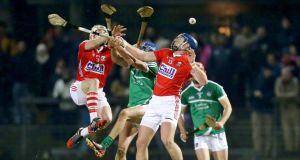 Cork’s Michael O’Sullivan and Patrick Horgan with Gavin O’Mahony of Limerick during last weekend’s NHL Division IB opener at Páirc Uí Rinn: “If this was a championship match and we were heading for a replay we’d be tipping Limerick for victory the next day out,” was John Allen’s verdict on the draw. Photograph: Ryan Byrne/Inpho

Well, the hurling season is off and running and if last weekend’s honest endeavour was an indication of what’s to come then we want more .

Division 1B’s top game – Cork v Limerick – is over with the best result possible for that section with the sides ending even. If this was a championship match and we were heading for a replay we’d be tipping Limerick for victory the next day out

For some reason, given the importance of the result, this game never hit the heights. There were very few times when you could say there was a serious bite evident .

Cork, in the opening quarter, showed glimpses of skill that could be described as exquisite. Two of Patrick Horgan’ s points in that period were of the gifted wrists variety.

Conor Lehane’s points were almost equally as impressive. It looked for a while that we were going to witness a drubbing similar to the one the Rebels inflicted in Tipperary in the opening game of last year’s league. But Limerick settled down. Their corner forward Graeme Mulcahy was shown a red card by referee James Owens for an-off-the-ball incident and the game became a bit one-paced for a while.

Limerick, though began to play with much more desire and fought like tigers all over the field.

Impeccable
Their half-back line of Paudie O’Brien, Wayne McNamara and Gavin O’Mahony were superb, as were midfielders Paul Browne and Dónal O Grady. They were also fortunate Shane Dowling was on the field of play as his free-taking was impeccable from beginning to end .

The Cork players, on the other hand, have some serious questions to ask themselves re the “fire in their bellies” so often referenced when GAA matches are being discussed .

They have skill in abundance but last Saturday were devoid of passion or direction.

Laois’ surprise victory over neighbours Offaly and Wexford’s narrow win over Antrim means those counties sit at the table top after round one.

What a great sight the Division 1B table makes for both counties this week. Laois occupy top spot with Wexford at number two ( on scoring difference). There will be a much needed buzz at training on Tuesday night as the teams prepare for next weekend’s fixtures. Laois can be particularly pleased and will push Cork all the way at home on Saturday night.

In the top tier Tipperary can count themselves lucky to have come away with the two points in their opening game. If the Waterford forwards were more accurate Tipperary would be heading into this weekend’s clash with Kilkenny without points and under pressure .

Kilkenny, on the other hand, without points themselves will have been fairly happy with their performance in Ennis last Sunday evening. With six debutants they were as good as Clare and deserved a draw.Their star performer, once again, was that old warhorse Henry Shefflin.

And it wasn’t his consistency from frees that impressed the most (or his dancing moves), no it was his absolute determination to win every ball that set him apart. He fought for every sliotar as if it was an All-Ireland final and he lasted the 70 minutes, which shows how well-conditioned (that’s fit, in old money)he is .

His successor as player of the year, Tony Kelly, saw the game more or less pass him by. This was a very harsh return to the real world of top class, no frills, hurling in the most trying of conditions for a player who displayed an amazing array of skills and work-rate on the rock hard surfaces of last summer.

He’s not for staying down too long though. On Wednesday he contributed a goal and 10 points in LIT’s surprise demolition of neighbours UL in the Fitzgibbon Cup quarter-final .

February is the most demanding and trying of months for all these top hurlers playing in the third level competitions.

For most of them the focus is very much on the midweek games and the drive to win the much sought after Fitzgibbon medal .They are all playing at least two important games a week, travelling, training on the field and in the gym, doing recovery sessions, some rehabbing injuries, attending lectures, studying, endeavouring to prepare wholesome meals for themselves and mentally getting themselves up for the next game. There isn’t much time for anything else with that schedule .

Demanding masters
The competition’s final at the beginning of March puts an end to that gruelling period and their attempts to serve two very demanding masters .

In that afore-mentioned 1A top teams clash Clare showed they can grind out victories as well as having the ability to win with grace and elegance.

On the evidence of last Sunday they should be too good for Dublin in Parnell Park this weekend.

It’s only game two and we saw many twists and turns in last year’s league but a loss here will have Anthony Daly’s team under real pressure not to end up in the relegation play-off.

Dublin, like Galway over the past number of years seem to be unable to maintain a level of progressive positive consistency. The great players in all sports and the great teams are able to reliably perform to a high standard regularly .

But, as we have seen before, Dublin are capable of a big performance after an under-performance.They will need one of those on Sunday.

Galway gave that big performance last Sunday so can we expect a repeat this weekend in Waterford? Recent history would suggest not but of course we know they are well capable of building on the blocks of 2012 and achieving the ultimate goal of silverware in September. Early days maybe but the signs are positive.