Seán Moran: Tipperary show how All-Ireland success has become a matter of timing 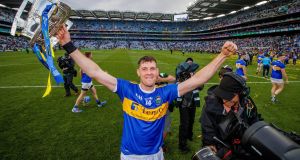 Séamus Callanan: once again a contender for Hurler of the Year. The Tipperay captain’s leadership and goal-a-game record over eight fixtures speaks eloquently for itself. Photograph: Ryan Byrne/Inpho

All about timing: it’s a small sample size but the evidence of the first two years of the experimental championship format suggests one trend; the two champions have both started well, hit a trough halfway though and rebounded to win the All-Ireland.

The All-Ireland semi-finals – note the plural – worked out ideally for Tipperary. Like Limerick last year, who saw the only team to have beaten them, Clare, eliminated in the last four, Tipp watched as Kilkenny shocked the champions.

Limerick’s apprehension about Clare last year would have been more based on the counties’ proximity and the familiarity their players have with each other from an early age, all of which makes their meetings unpredictable.

For Tipp this year, though, the delight at not having to face Limerick was more based on how comprehensively they had been beaten in the Munster final and how difficult it had proved to cope with their opponents’ game plan.

Freed from the imperative to find solutions to perhaps insoluble problems, Tipperary made their way past Wexford and even the manner of that proved immensely beneficial. Sunday showed how disruptive a red card can be in a match and yet Tipp successfully negotiated the loss of John McGrath to come through with their confidence restored.

It’s either a reflection of the championship’s competitiveness or the simple difficulty of winning seven or eight matches in the same summer that makes defeat such a probability for teams but when that defeat is sustained makes all the difference.

Wexford and Galway, like Tipp, lost just one match all championship but in their cases, there was no recovery.

Finals can turn on small things but also on serious upheavals and having someone sent off, the fate that befell Richie Hogan, came into the latter category as the match had turned in Tipp’s direction by the 33rd minute dismissal.

Kilkenny were criticised for the sterile nature of their attempts to chase the match while adapting to 14 men on Sunday but that slightly overlooks how their season had progressed. It may have looked futile to be bombing high ball down on the attack but that’s how goals had often come for them this championship.

Of the 11 scored over eight matches, all but three involved full forward Colin Fennelly, who shot four and assisted four. The quality of his season plus the redeployed menace that TJ Reid, especially, and Walter Walsh would pose if they caught a ball cleanly in front of goal was the motivation, however desperate.

Fennelly didn’t win a single aerial possession off Ronan Maher and Barry Heffernan was equally hard to beat under dropping ball. Of course it needed some variation but the fact remains that Kilkenny were just trying to kick-start something that had previously worked, including against what had been the most formidable defence in the championship.

For instance the goal against Limerick came from all the way from an Eoin Murphy puck-out.

They needed to get lucky once or twice but were up against the market leaders in defending orthodox attacks. Maher’s exceptional season and the excellent support, after an uncertain start, from Heffernan meant that luck never came into it.

The role of Liam Sheedy’s management team has been dissected and analysed in tribute to the achievement of taking the county from a summer that ended in early June all the way to an All-Ireland that bookended the decade for Tipp.

Sheedy’s collegiate management style was in evidence as soon as he took over. By his own admission, taken aback at the burgeoning size of backroom teams in the nine seasons since he had managed the county to the 2010 All-Ireland, he initiated a commercial board to oversee fund-raising for the senior hurlers.

The variety of people appointed left no stone unturned. At the start of the championship, it was widely remarked on that S&C coach Cairbre Ó Cearralláin had produced a lean and hungry look for the team that swept Cork aside in the opening Munster championship match.

It was a sharp riposte to criticisms that the selection had been too conservative in overlooking the All-Ireland-winning under-21s of last year. Sheedy took time afterwards to dispute the idea that players in their late 20s were past it for inter-county competition.

Eamon O’Shea’s return after the league “in a support role” rather than as a selector was also significant. He was the one entrusted with the last words to the players’ huddle before the All-Ireland on Sunday. His involvement with Tipperary has been rightly celebrated in the 11 years since he came on board as coach in Sheedy’s first tenure.

His most significant contribution is arguably Séamus Callanan, whose career wasn’t thriving when O’Shea took over as manager in September 2012. By the 2014 season, he had restored the player’s confidence and Callanan responded with a run of three years on the shortlist for Hurler of the Year.

Even in the third of those championships, 2016, when he was no longer in charge and Michael Ryan was manager, O’Shea continued to keep in touch with the player whose 0-9 from play in the All-Ireland final was the centrepiece of a big win over Kilkenny.

This year Callanan was appointed captain and has led from the front all year. His goal-a-match record over eight fixtures speaks eloquently for itself and positions him for another, fourth, nomination for Hurler of the Year in six championships, testament to a stratospheric level of consistency in that hardest of roles, being a reliable scorer at the elite level.

After the unexpected opening day win over Cork in Páirc Uí Chaoimh, Sheedy remarked that redemption doesn’t come in a day. True – but it came.

1 ‘Manchester United are lucky to have you’: Klopp responds to Donegal schoolboy’s letter
2 Liam Toland: Larmour can distract England while others flourish
3 England name Jonathan Joseph on the left wing
4 This month a decade ago, football and Dublin changed course
5 Solskjaer complains about Molten balls after Brugge draw
Real news has value SUBSCRIBE