Seán Moran: This year promises to be momentous for football 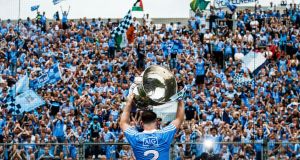 The sad irony of Eugene McGee’s death just as the football championship begins has been remarked on: Dublin shortly become only the third county to stand on the threshold of the fabled football five-in-a-row, a landmark McGee’s Offaly legendarily prevented Kerry from achieving.

How this will play out is set to be the story of the football championship. Either way, we get history – the Holy Grail in Smithfield or some player or team forever immortalised for bringing Jim Gavin’s team to the same dusty destination as Kerry reached 37 years ago.

Mick O’Dwyer’s team got closer than anyone else, their own county predecessors in 1933, Wexford 100 years ago and in hurling Cork, 1945, and most recently Kilkenny in 2010.

Only Kerry in ’82 and Kilkenny actually reached the All-Ireland final in their quest for a fifth title – and Kerry led until the most famous goal in football history derailed them in the 69th minute.

Realistically Dublin are only likely to lose in an All-Ireland semi-final – the round at which they have exited the only three championships they haven’t won this decade – or a final, which would be a first in 25 years, whether ransacked early or pipped by late intervention.

Such speculation, likely to be among Gavin’s biggest challenges in preparing the team for its destiny this summer, aside there are a number of other influences, which promise to make 2019 a momentous year for football.

Pertinently, these issues are all woven into the less celebrated work of Eugene McGee, his history as a catalyst for change in the GAA and an acute analyst of and authority on football and its direction.

He knew that Séamus Darby’s goal would be the headline on his GAA career and his 2014 memoir The GAA In My Time features a picture of the match ball from the 1982 final but his influence is far wider ranging on the evolution of football to where it stands now, facing significant change.

The preliminaries of this year’s football championship played out overseas and coincidentally featured the two counties, Mayo and Galway who are expected to contest the only provincial final likely to be categorised as “eagerly awaited” at this stage.

Kevin McStay has made the point eloquently in these pages that provincial football championships are on borrowed time and no longer command sufficient interest, which is why broadcasters are uniformly opting to cover the round-robin hurling championships during the early part of the season.

The Football Development Committee, of which Eugene McGee was a member, proposed in 1999 a radical, league-based championship structure, which would in its alchemy both combine provinces and yet retain the provincial championships.

Inevitably, it was shot down at Congress and withdrawn from the clár, but it inspired a response, which led to the creation of the current qualifier system, introduced for 2001, another ingenious structure, which combined additional matches without diluting too much the sudden-death format of the championship.

Twelve years later the Football Review Committee, chaired by McGee, having made some inroads on the problems of indiscipline earlier in 2013, issued a second report looking into the competitive structures in football.

That too suggested a rationalisation of the provincial championships and the introduction of four eight-county conferences based on the provinces but instead of re-drawing the map, counties would move from Ulster and Leinster into Connacht and Munster depending on how they got on in the preliminary rounds each year.

It achieved little traction but there has since been growing concern about the provincial system – to the point where it is now being openly questioned.

The qualifier system has definitely marginalised the provincial championships, first as a necessary stepping stone to All-Ireland success and secondly as even a reliable proving ground for contenders. Since 2001 most serious counties have focused on reaching the last eight, a target even more urgent in the current round-robin quarter-final structure.

For instance in the 23 years between Down’s 1968 and 1991 All-Irelands, the Leinster and Munster champions lost just one match to their Connacht and Ulster counterparts.

In those days the GAA was happy with the All-Ireland as a representative series between the representatives of the four provinces rather than a more integrated and fairer structure.

One of the provincial system’s great strengths has been that it provides four senior trophies for contesting. Remove the provinces and there’s just one championship annually for everyone.

But even that is now being challenged and the environment that made a Tier 2 football championship unthinkable – not least to the counties directly affected – as recently as three years ago has been transformed with growing numbers accepting that something has to be done to provide meaningful competitive opportunities for more than the top three or four counties.

London manager Ciarán Deeley, a supporter of the concept, tweeted on Tuesday in answer to the anxieties that such a competition wouldn’t attract media attention.

“Saw inter-county coach saying a B Championship for the GAA would be bad because RTE wouldn’t show much highlights! Who cares?? Do we do this for a 5min clip on tv or to win football games? I know what I want – to win games in a competition that we have a chance of winning!”

April’s meeting of counties likely to be involved in a graded championship was positive and with the precise format being deliberated in those same counties, a motion will go to autumn’s special congress with every chance that this radical departure will be adopted.

In time to come 2019 may well be seen as year zero – and not just because of whatever fate awaits the Dubs.