Seán Moran: Social distancing points more and more to a summer of silence 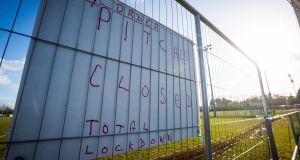 The core issue is whether Gaelic games can be played while social distancing continues to be a public health requirement. Photograph: Ryan Byrne/Inpho

There was a concern that the Government plan for relaxing the Covid-19 lockdown had left the GAA like parents having to tell the children that there’s no Santa Claus. It proved largely groundless, as not many watching the Taoiseach on Friday’s Late Late Show would have been persuaded that the much-desired return to play was actually on the cards.

That’s not to say that there weren’t plenty of queries triggered by the tantalising prospects apparently on offer but many of those were of the sceptically cautious variety: people not particularly buying into the likelihood but anxious not to be wrong footed, either.

The intrusion of medical reservations that followed has to an extent made the association’s task easier. In these pages on Saturday Dr Cillian De Gascún of NPHET said that “team sports are going to be in a very difficult position” in the continuing absence of a therapy or vaccine.

You can’t have 30 players and seven officials on the field of play, all keeping two metres away from each other

Then this week in the Irish Independent former Limerick footballer Dr Jim O’Donovan, a respected medical adviser both with the Gaelic Players Association and Croke Park’s Medical Scientific and Welfare Committee, echoed Dr De Gascún’s sentiments, adding that the commonplace focus on empty stadia was pointless: “There may be a difference in spectatorship but not for the players as long as social distancing is in place”.

The GAA is considering its response to the Government carefully. On one hand there’s an understanding that the five-step plan for lifting restrictions was both designed as a morale boost for a society getting fed up with them as well as so qualified by provisos as to be fairly speculative – but on the other, the membership needs realistic direction.

To date Croke Park has avoided issuing notional timetables and that approach has been vindicated by the continuing uncertainty but there is a need now to produce some guidance based on the envisaged need for social distancing extending until the end of August, at least.

If there is a miraculous easing of the situation, that can be responded to, and no one will object very much to being allowed return to training ahead of schedule.

There are three areas that the GAA’s management committee needs to address: the commonly proffered remedies of a) staging matches behind closed doors and b) resuming activity by instituting protective measures for players either through regular testing or stringent pre- and post-match protocols and c) a recommendation on what can and can’t be done in the weeks ahead.

It was significant that when the Taoiseach floated the idea of August and September All-Irelands being played like an uncle bringing us tickets for a sold-out concert, he slipped in the proviso of ‘not with spectators’ while acknowledging it as a matter for the GAA.

The association is not persuaded by the idea and it’s not just that this solution ignores teams. Big matches are about the community as well as the competitors. The idea of playing behind closed doors has been reluctantly accepted by some players and managers as being ‘better than nothing’ but that’s not how it’s viewed universally.

As a celebration of the games, which is what they primarily are, All-Irelands in an empty stadium would be pointless. Some revenue might be salvaged through broadcasting rights but it would hardly make for great television and the dependency on gate receipts has been widely acknowledged meaning the material gain wouldn’t be substantial.

The GPA were originally going to canvass opinion on the matter among members but decided to hold back until the idea was firmly tabled, which is unlikely to happen.

The core issue is whether games can be played while social distancing continues to be a public health requirement. The Government return to play plan appears to envisage clubs getting back on July 20th with counties following on August 10th.

Dr O’Donovan spelled out the reality when saying that there was no difference between re-starting club and county activities because the need for social distancing made neither safe.

In other words you can’t have 30 players and seven officials on the field of play, all keeping two metres away from each other.

Suggested facilitation like frequent testing and going to and from the ground immediately and without further interaction still involves – regardless of obvious impracticalities – an element of risk to players, their families and work colleagues.

Why would anyone want that for the sake of what is ultimately a recreational pastime?

What if some players wanted to take the risk and others didn’t? It is very unlikely that the GAA would allow such divisions to emerge within the games any more than they would permit intercounty championships without Ulster counties, were they to fall foul of divergent public health situations between north and south.

To date all public utterances from the GAA have been consistent in prioritising health and safety. It will be surprising if the association doesn’t continue to play a cautious hand in all discussions about exiting from the lockdown.

With social distancing on the agenda until the end of August, a staggered return to play for clubs and counties would take us, at the earliest, into September for the former and October for the latter.

Were that to be the starting point for the GAA looking ahead, it would make possible one of the options under consideration – that county panels could be stood down until September at the earliest, safe in the knowledge that they will have plenty of time to respond even should there be a miraculous improvement in the situation.

It is of course possible that in a fast-developing environment something unexpected and positive might pop up and the reality is that not even experts know precisely how the pandemic will progress.

In the meantime, the GAA has to cope with reality.