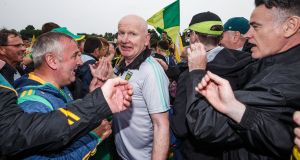 Like everyone else in these troubled times, football and hurling panels are scanning the horizon for some hope of a return to normality in the middle of the coronavirus pandemic.

For Donegal manager Declan Bonner, there was a bit of a false dawn at the weekend with the speculation that the Department of Sport was pondering ways in which intercounty teams could, with frequent testing for Covid-19, perhaps return to training.

“A few of us were talking on Sunday,” says Bonner. “The message that came out probably gave a bit of hope that there was a possibility this could happen. How would it be monitored? All players and managers would love to get back but it would have to be in a controlled, safe environment.

“The GAA continue to say that they’ll take their lead from the HSE and it’s natural they won’t take any risks – 100 per cent.”

Horan’s message that the association was ‘open’ to the idea of extending the championship into next year if necessary and Bonner welcomed the qualified optimism of the idea.

“That they’re keen to run the 2020 championship brings a bit of positivity but it would be very difficult to complete two championships in the one year as well as a national league and whatever else. The way I see it is that the clubs will get back first and that’s fair but we still don’t know how that will fit in with social distancing.”

The urge to erupt from the shackles of lockdown and play some football is strong and like a number of his peers in intercounty management, Bonner has started to see even the circumscribed prospect of matches behind closed doors as worth a shot.

“Is it ideal? No – far from it; you want a full house and that atmosphere but if that’s possible and I presume the GAA are looking at some ways of taking in revenue and TV rights would be something. Anything is better than nothing and we’d have no issue with that to be quite honest.”

With so many waiting and hoping that they might get to see some action in 2020, few have as pressing a reason for frustration as Donegal’s footballers, who have been knocking on the door of the game’s top level for the past two seasons and hoping to put at times harsh lessons to good use.

Their manager hopes that the landscape will change in the coming weeks and months and reckons that teams will need “three or four weeks” to get players up to a reasonable level of match fitness.

The season ended abruptly for Donegal – like everyone else – in February after five league matches and with an enticing clash with Tyrone in the offing.

Bonner has won the Ulster championship both years since being appointed in 2017 for his second term in charge but each season ended with disappointment in the All-Ireland round-robins and last-day defeats by Tyrone and Mayo. He’s familiar with the younger players having managed the county minors – to a first All-Ireland final in 2014 – and under-21s in recent years.

“Well down the road,” he replies when asked at what stage of development he sees the team. “There’s good belief in what is a young group but with two to three years’ experience at this level. We were starting to come into form in the last game against Monaghan and with Tyrone due in Ballyshannon the following week when the plug was pulled.

“Late goals cost us in some matches but overall progress has been steady.”

Those late goals, against Mayo, Galway and Dublin cost a cumulative five points given that the matches ended in a draw and two one-point defeats. Overall though, it had been very much a season of consolidation and steady selections with 11 players starting all five fixtures and three more doing so on four occasions.

The ever-presents include Michael Murphy, whose performances have been at consistently high level in the past two years with an All Star in 2019 and man-of-the-match displays in his last two appearances in Croke Park. Might the break be beneficial for a player whose county career started when he was 17 and is now 30?

“He’s like any other player,” says Bonner, “– well, he’s not but he’d love to be back playing like anyone else.”

Last season’s high point was the display against Kerry in Croke Park, a high-scoring quarter-final draw against the side that took Dublin to a replay in the All-Ireland. A win would have put them through to the last four but they were still fancied to complete the job in Castlebar.

Instead, the team misfired and stalled against a Mayo team high on the emotion of intense home support. Even with the benefit of hindsight Bonner doesn’t have a whole pile of theories as to what went wrong.

“Hard to pinpoint exactly what happened. People say that early on we looked taken aback by the physicality but we expected nothing else and had spoken about exactly what Mayo would bring to the table.

“We took too long to settle and left ourselves with a mountain to climb. There was in fairness a decent 20 to 25 minutes in the second half but at the same time we had the opportunity to take scores that would bring us level and didn’t take it.”

I honestly believe in the last couple of years there’s been more top-quality matches than for a long, long time. The actual game had turned a corner

There was some bad luck with venues in that of the two qualifiers in their group, the draw gave them home advantage against a less experienced Meath team while they had to travel to take on Mayo. Bonner’s slightly impatient with the suggestion and aware that the productiveness of lessons from losing can only be judged in retrospect.

“Ah, listen, you can throw out those scenarios any way you want but ultimately we felt that we were well capable of going down and getting that performance to beat Mayo and we didn’t get it – that’s why we lost. On the question of it being a learning experience, we just won’t know until we’re back in those situations going into the last quarter of a tight championship match.”

Viewers of Eir Sports in recent weeks have seen a promo for the station’s series of classic GAA matches, which features a younger Bonner kicking the insurance point to beat Dublin in the 1992 All-Ireland final.

The former player can wax sentimental about that sunburst of a day when Donegal won their first All-Ireland but the analyst in him sees the match as part of a continuum in a game that keeps changing and has been through several different evolutions in the three decades since. Despite the effort put into trying to diagnose the ills of football in the past few years, Bonner believes that it is actually thriving.

“So much has changed and even looking at games from a decade ago, it’s moved on in the last few years. It’s continued to evolve beyond 2010, ’12 and ’14. I honestly believe in the last couple of years there’s been more top-quality matches than for a long, long time. The actual game had turned a corner.

“I wasn’t a big supporter of the rule changes, particularly the forward mark, which for me just slows the game down. Things had developed to the stage where the top teams were reliably producing good spectacles.”

If only we could be the judges of that anytime soon.

1 Gerry Thornley: Ireland don’t want to box themselves into a corner
2 Owen Doyle: Ireland suffered from officiating of the breakdown
3 Kevin McStay: Maybe a knockout All-Ireland Championship is the long-term solution?
4 Thomas Galligan and Cavan raring to meet Dublin in Croke Park
5 Sexton and Henshaw to miss Ireland’s clash with Georgia
Real news has value SUBSCRIBE