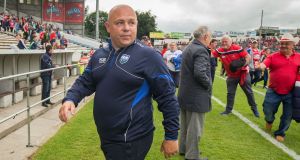 And so Derek McGrath became the first managerial “casualty” of the intercounty season. After five years leading Waterford, he stepped down having more or less intimated as much at the start of the year. The announcement on WLR was characteristic of his tenure, emotive but essentially pragmatic.

When he spoke to media at the hurling league launch in January, it was pretty clear that he’d deliberated a fair bit about coming back for the fifth year but the outcome had always been likely, as he didn’t want to bow out on the basis of an All-Ireland final defeat and all of the sense of possibility and lost opportunity that creates.

There was also a clear undertone that the odds would be against his renewing for a sixth season – allowing that in January the season stretches ahead and a championship has yet to run its course.

Look at it from his perspective.

“So you almost selfishly start to think the only way to improve is to win an All-Ireland the following year,” he said at the launch. With that pressure at the back of his mind, it seemed unlikely he would have hung around had the MacCarthy Cup (or Grail, as it might as well be in Waterford) been landed this year.

A very disappointing season would hardly convince him to stay, either. Of course that wasn’t on the radar in January but few managers really know how things will unfold because of the influence of unexpected events and McGrath hadn’t had huge issues with injuries and unavailability in his four years.

Pauric Mahony’s dreadful knee injury in 2015 was a blow, coming between winning the league and what would be an improved championship but they coped. Tadhg de Búrca’s suspension in last year’s All-Ireland semi-final was overcome because of the quality of Darragh Fives as his replacement sweeper against Cork.

Conor Gleeson’s red-card absence in the final was an influential loss last September but individual incidents aside, neither McGrath nor anyone else could have foreseen the plague of injuries and other absences that befell his team in the championship.

Fate had already dealt them a poor hand, as with the shallowest panel in the province Waterford were least equipped to be handed the schedule of four successive weeks, during which they would have no home fixtures because of the state of Walsh Park. In the event scheduling didn’t really matter because some of the injuries were season-ending anyway.

Back in January, McGrath had been hopeful that Shane Bennett, one of bright talents from the All-Ireland winning minors and under-21s, who had announced that he wanted time away from the inter-county game, would return at some point during the year. Not too long afterwards, that was ruled out.

Another of the 2013 minors Tom Devine had taken last year off in order to travel. His return was initially presented as balancing Bennett’s loss but as Nicky English pointed out in these pages, Waterford needed both of them rather each of them rotating. Later Bennett’s brother Kieran, who had played in last year’s All-Ireland final, unexpectedly followed suit.

It would have been easy for McGrath to persuade himself that 2018 had been a chapter of calamity and that it could simply be written off so that he could go again with a full complement but he was probably too shrewd to chase that particular balloon.

Five years’ operating at the top level of intercounty hurling – particularly without any championship silverware – is hard going, let alone for someone, who put so much effort into management that he took leave of absence from teaching.

There was also the wear-and-tear of relations with the county board, who felt at times slighted by McGrath’s insistence on getting the best for his players and perceived imperviousness to the challenges facing one of the GAA’s more penurious units.

His attitude to the league also caused resentment, especially last year’s fielding of experimental teams once relegation had been avoided but the manager had made clear that Waterford needed to throttle back on league involvement in order to conserve energy for the championship – striking a balance he felt hadn’t been achieved when they had won in 2015 and reached the final a year later.

Acutely conscious that this year would be very difficult with the round-robin championship, McGrath attempted to road-test more players and be better prepared for the problems, which might – and did, with a vengeance – arise. Even relegation when it came had the feel of a season in which the last dice were being thrown.

Yet, arguably this year’s Munster championship was a fine achievement. Up to the point his players began to drop like flies – about 15 minutes into the match against Clare in Ennis – they were leading by four points and playing quite well.

The injustice of the ghost goal against Tipperary has been well ventilated and after the one uncomplicated thrashing, by Limerick Waterford bounced back to push champions Cork all the way to injury-time. In other words, an adjustment of two points plus a correct umpiring call and they’re into the next round.

Leaving the world of benign hypothesis, though, Derek McGrath may also have felt that he had done as much as he could for the current group of players.

In his departing interview he touched on the possibility of a return at some point. He is certainly young enough, 42, to do that and not all of the precedents in this area are discouraging. With a young family and a career, he could do with the re-adjustment.

Twenty-six years ago he lined out for Waterford in the county’s first All-Ireland minor final since 1948 and went on to mentor his school De La Salle’s back-to-back All-Ireland colleges’ titles. He took the seniors to a league title, a first win over Kilkenny in 58 championships and reached an All-Ireland final.

He’s been buzzing around Waterford hurling for a good while, bringing energy, stubbornness and revivalist zeal.

He’ll be missed and not just in his own county. The current aura of satisfaction around the experimental championship format, especially in Munster, owes a great deal to its competitiveness. Waterford have the talent to keep going but the appointment of McGrath’s successor will be crucial.

The last thing the game needs is to lose a county overboard, particularly one that has been such a vital presence in the modern game.