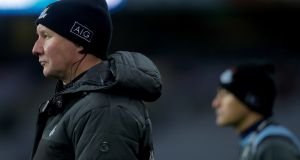 Jim Gavin: declared that the performance against Tyrone “just hadn’t been good enough” and that it would “obviously not help the players that were out on the pitch – that’s for sure”. Photograph: Oisin Keniry/Inpho

Saturday night. In darkness. A season that had gone unexpectedly badly results in the title being lost amidst worrying performance levels. There is an apparent listlessness amongst key players, whose energy and drive had been central to great achievements in the autumn.

The talk is of waiting and seeing, not jumping to conclusions just yet before the big prize is contested in the months to come. Judge us then when we’ve had a chance to make history.

Whether it’s Irish rugby or the Dubs, the weekend was a sobering experience as much for the encouragement of rivals as anything else and the existential questioning it may have prompted.

We’ll leave Joe Schmidt’s challenges and travails to others but for Jim Gavin this year’s league has taken him to new places.

Now in his seventh season in charge, the Dublin manager’s statistics are extraordinary: the current league was the 19th major inter-county competition – league, provincial championship and All-Ireland – Gavin has contested and only the third in which he hasn’t orchestrated success.

That’s 16 finals, against 10 different opponents, all negotiated with varying margins to spare. This relentlessness has been part of the mystique. In context, Dublin lost six regulation league matches in six seasons. On Saturday they were beaten for the third time in six matches this campaign.

No-one on the outside and maybe even in the camp can be certain why this happened. There are positive theories: the team is totally focused on becoming the first to win five-in-a-row and its training calendar has been adjusted accordingly.

Equally there are negative possibilities: fatigue, waning motivation and just the sheer stress of being expected to do what no other county has managed since the dawn of the GAA.

Either way it’s a deviation and therefore a risk. If a team has been used to accessing consistent competitive form and playing to win, a sudden inability to do that is disorientating. Going the distance in the league has led to an All-Ireland in each instance bar one, 2014.

The interesting thing about that year was that it was Dublin’s worst league finish this decade and they only won the title because of the format, which incorporated the top four into semi-finals. They had only made the top four because of a last-minute Diarmuid Connolly point, coincidentally against Tyrone, in Omagh.

That should be at the heart of Dublin’s misgivings about the current situation. League does matter and their own ascent since 2009 was built on that understanding.

If there has been a conscious decision to prioritise championship preparation to the exclusion of all other distractions there was little evidence of it in Jim Gavin’s demeanour on Saturday night, which was not that of a man unconcerned by what he had seen.

It’s very unusual for him to criticise players so when he declared that the performance “just hadn’t been good enough” and that it would, “obviously not help the players that were out on the pitch – that’s for sure,” there was no reason to regard the reaction as contrived.

In trying to second-guess what’s going on, there have been knowing suggestions that Dublin are better off leaving the table rather than allowing one of their championship rivals get a crack at them in Croke Park in a league final but that’s to ignore precedent.

By focusing on winning every match they contest, Dublin have done more to enhance the brand in league finals than run the risk of undermining it.

There’s every chance that posterity will be equally amazed by the county’s league record during the Gavin years as by the championship feats, allowing that winning a fifth All-Ireland would be unprecedented.

Going through so many nondescript afternoons in venues up and down the country and so consistently refusing to be on the wrong side of the scoreboard takes extraordinary focus – a determination that has been missing this season.

The drive that kept the show on the road for 36 unbeaten matches between 2015 and ’17, at times with late equalisers and goals scrambled out of nothing both lifted Dublin’s morale and intimidated potential rivals. On Saturday the obvious question was whether there is now blood in the water.

By way of reference Kilkenny’s hurlers, whose one-for-one acquisition of league and championship titles matches and far exceeds Dublin’s (9-11 as against 5-6), also came into their five-in-a-row year in 2010 with a comparatively underwhelming league campaign and a failure to reach the final. Brian Cody’s team didn’t dominate the spring to the same extent and few saw it as an argument against summer prospects.

Factor in key injuries and the destabilising hype before the final but in the end there was no five-in-a-row just as there hasn’t been for any of the five teams in GAA history attempting the distinction.

Tyrone manager Mickey Harte sounded aware of the realities of his team’s win on Saturday but he will have been satisfied that since the 12-point mauling in the 2017 All-Ireland semi-final, Tyrone went on to lose three matches against Dublin last year by an average of just over 0-4 and now have turned that around into a three-point win.

It’s not to be scoffed at and Dublin would be the very ones to testify to that. Nine years ago, under Pat Gilroy they went to Omagh with the vast majority of the players who would win the following year’s All-Ireland to face the then Ulster champions, who a year previously had themselves been All-Ireland champions.

Tyrone in the 2000s, a decade in which they harvested three Sam Maguires, had never been relegated but they needed to win in April 2010. Instead they were well beaten and four months later Dublin repeated the dose in the All-Ireland quarter-finals, the county’s first championship win over the Ulster men in 15 years.

You can spin it any way you want but league matters and sometimes marks turning points.