New deal extends across football, hurling and camogie for men’s and women’s teams 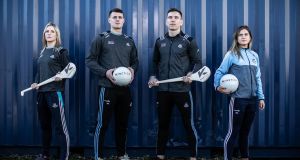 Dublin GAA has agreed a new commercial agreement with Kinetica Sports as its official nutrition partner in part because all products are batch-tested within the World Anti-Doping Agency (Wada) framework.

While there were offers of interest from other brands, Dublin opted for Kinetica, which is also part of the Informed Sport Programme.

“As a leading Irish brand in this area, where all products are batch tested and of the highest quality, we believe it will assist our players of all four codes to optimise their performance,” said Tomás Quinn, commercial and marketing manager with Dublin GAA.

All Kinetica products are batch tested within the Wada framework to ensure consumers a safe and dependable sports nutrition product. Originally a Cork-based company, it was recently bought over by the Boyne Valley Group in Meath

Meanwhile, Dublin hurler Paddy Smyth has partly welcomed 10-week break until their next competitive match in the Leinster championship after Matty Kenny’s team failed to make the knockout stages of this year’s Allianz Hurling League.

“Probably disappointed not to get the knock out stages to get some extra competitive games,” admitted Smyth, “but I suppose, looking at the league, it was about building good depth in the panel. We had over 30 lads who got game time. So from that aspect, that should benefit us going forward into summer.

“The knockout stages are probably higher intensity. They benefited us last year. We had Tipp and Limerick, two good games. But we’ll go back the next couple of weeks and work on things in the training ground ourselves. But I don’t think it (the 10-week break) is too long, to be honest. We can train hard now. Then go back to the club for four weeks and then another three weeks will come in quick enough.”

Dublin’s championship may well be decided on their opening two games against Kilkenny and Wexford: “It’s nearly peaking for them first two games. It is tough. But we’ve all said, since it’s been restructured, it’s been much better. You get four games at least. Something to look forward to now.”

Back-to-back All-Ireland champions Ballyhale Shamrocks and beaten finalists Borris-Ileigh, meanwhile, are the dominant presence with 10 places between them on the AIB GAA Club Players’ Awards team of the year in hurling.

Defenders Joey Holden, Darren Mullen and Evan Shefflin have been honoured on the team of the year - so too, their forward duo of TJ Reid and Colin Fennelly. Tipp and Munster champs Borris-Ileigh are represented by goalkeeper James McCormack and defenders Paddy Stapleton and Brendan Maher with Dan McCormack’s midfield energy recognised and Jerry Kelly in attack.