Rebels time their assault on Kilkenny to perfection 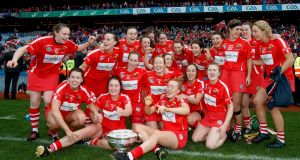 There’s been a bit of the wounded lion about Cork’s camogie team through the years, rarely more dangerous than when there’s talk of them no longer posing quite the threat they once did. But as the clock was hitting 60 minutes at Croke Park, and they were trailing by a point to the team that beat them in last year’s All-Ireland final and again in April’s League decider, it seemed as if those wounds would have to be licked for at least another 12 months.

Up stepped Gemma O’Connor, the nine-time All-Ireland winner who had made a Lazarus-like recovery to play in the final. Cork had ruled her out of the game after she had picked up a knee injury in the semi-finals. But Kilkenny manager Ann Downey smiled at the notion that “the warrior” would play no part. “Unless she’s after losing a leg,” she said before the game.

Kilkenny were left to rue O’Connor’s healing powers. With five minutes to go Miriam Walsh had put the defending champions ahead with a brilliant point from out on the right wing and having endured a 22-year drought before finally lifting the O’Duffy Cup last year, a two-in-a-row was within touching distance.

At which point O’Connor levelled the game with a quite majestic strike from just inside the Kilkenny half.

After two of them, Julia White came on for Chloe Sigerson. The 26-year-old teacher had struggled for much of the year with Achilles problems, her role largely restricted to that of “impact sub”.

And you really can’t be much more impactful as a substitute than to score the point in the final seconds that wins your county its 27th All-Ireland title, enough to move it one ahead of Dublin on the roll of honour.

“I wasn’t really thinking, I was just going on instinct,” she said of the moment she found space in the middle of a bunch of Kilkenny defenders and hit a perfectly struck point at the death to win the game. “It was the best feeling in the world.”

Cork had opened the game much as Kilkenny had last year, playing with an energy and pace that the champions struggled to match, going three points up by the 10th minute. Kilkenny didn’t score from play until 20 minutes in to the game, but would have felt relieved enough to have only trailed by three at the break.

Downey evidently had a stern word, Kilkenny upping their game by several notches, taking the lead for the first time nine minutes in to the second half when Denise Gaule converted a free.

The conditions were largely dismal, a swirling wind and occasional bursts of torrential rain making it difficult for the players, the floodlights on from the start of the game, lest we had any notion it was still summer.

It was only in those closing stages that a low-scoring game sprang to life, the crowd of 20,438, up by 401 on last year’s attendance (which was the first time it topped 20,000 since 2009), on their feet to salute those final three scores, Walsh, O’Connor and White’s points all sublime enough to have been worthy winners.

But it was White’s most memorable of moments that proved decisive.

Manager Paudie Murray wasn’t quite sure who to sprint to first when he sprang from the Croke Park sideline at full-time, White among the many recipients of a celebratory embrace. As was O’Connor, who, remarkably, had lasted the whole game.

And there was a special salute for Rena Buckley who became the first woman in the history of Gaelic games to captain her county to success in both camogie and football. This, incredibly, was her 22nd All-Ireland final, the victory bringing her tally of winning medals to seven in camogie, having already won 11 in football. She now moves one ahead of her former team-mate Briege Corkery to become the most ‘medalled’ woman in Gaelic games.