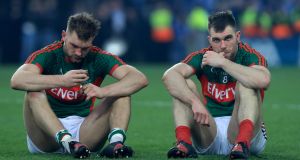 Almost as soon as the final whistle sounded on Saturday August 26th to seal Mayo’s place in the All-Ireland final, whispers of the by-now infamous Mayo curse began to circulate. Except having lost three All-Ireland football finals since 2012 the whispers this year are beginning to approach a roar.

Of course, this has been assisted with ever-increasing media coverage of the curse including documentaries, news reports, short films and even a detailed description last December on the UK television programme Countdown. The fact that the Mayo women’s football team have won four senior All-Ireland titles since 1999 is conveniently left to one side.

Having conducted oral history interviews in Mayo as part of the GAA Oral History Project, I decided to go back to the archive to investigate just what the rich personal accounts of the GAA in Mayo can tell us about this issue.

Between 2008 and 2012 the GAA Oral History Project team, assisted by local volunteers and schools, recorded interviews and gathered questionnaire submissions across Ireland. In Mayo over 50 people were interviewed and a further 90 people completed questionnaires. Surprisingly the curse is not the most commonly narrated intercounty story throughout these responses, but rather the day the crossbar broke in MacHale Park, Castlebar, during a game which did not even feature the Mayo team.

The details of this particular story are worth recounting as they offer an interesting juxtaposition to accounts of the curse and they are presented here as provided by the project’s interviewees.

The day in question was the 1962 Connacht final featuring Galway and Roscommon. It was a wet day in MacHale Park, and Galway were well in the lead when Aidan Brady, the Roscommon goalkeeper, hung off the crossbar as he attempted to stop the ball. The crossbar broke, the match was suspended and John Joe Walsh and his colleagues from Castlebar Mitchels rushed to repair the damage.

This took about ten minutes during which time Roscommon had an opportunity to regroup. When play resumed they took control of the game, beat Galway and brought home the Connacht title.

The above details – the day, the event, the teams, the goalkeeper, the length of the stoppage, and the impact it had on the match – were narrated by interviewees in Castlebar, Parke, Shrule-Glencorrib and even across the border in Kilmore, Co Roscommon.

This was not the only time the crossbar in MacHale Park broke, it happened again in 1992 when Mayo were actually playing a match, but that story was not so important to our respondents. It seems that key to the significance of the 1962 match was the impact it had on the outcome of the Connacht final.

Compare this rich detail with the varied accounts outlining the story of the curse. There are common features of this story: it was cast against the 1951 All-Ireland winning team who, passing through Foxford during their victory homecoming, passed a funeral without showing proper respect. However, depending on who is recounting the story the team are variously described on the back of a lorry or on a bus, while the person casting the curse ranges from the widow, to the priest, to a traveller woman – hazy and uncertain compared with the accounts of the broken crossbar, an event that occurred just 11 years later.

In addition, while memories of the broken crossbar are given by those who attended the game, I have yet to hear an account of the curse from somebody who was present when it occurred.

While the 1950 and 1951 homecomings have in many ways been rolled into one in the minds of many project respondents, I interviewed Fr Peter Quinn, player on the 1950 and 1951 teams, who attended only the 1951 homecoming. He was absolutely clear that the events described above simply did not happen. I also interviewed Terry Reilly, a local journalist who had himself interviewed several members of the 1951 team. None of his respondents could recall the curse actually being issued; nor did the players interviewed for the 2013 TG4 documentary.

Of course, it could be argued that this forgetfulness might be understandable if you believed you were the cause of a 60-plus year wait for another All-Ireland title. Yet equally, not one respondent to the GAA Oral History Project recalled witnessing the curse being cast on the 1951 team, despite many recounting how they attended the homecoming celebrations.

More interestingly still is that not one of the almost 150 respondents to the GAA Oral History Project voluntarily began to discuss the curse, it is not mentioned in any of the project questionnaires and it only features in interviews when it was teased out by further questions.

I was aware of rumours of a Mayo curse when I started interviewing in the county in 2009. I completed my last interview in 2011, but during that period Mayo were not in an All-Ireland final, their last had been 2006. Many of the interviewees voluntarily embarked on discussing their disappointment at not seeing Mayo win an All-Ireland or the length of time that had elapsed since 1951.

I followed these conversations by asking why they thought it had taken so long. Again not one respondent offered the curse as a reason – neither in seriousness nor in jest. The answers I did get can loosely be categorised as follows: not having players that were tall enough, strong enough or tough enough (although one interviewee did mention a young lad called Aidan O’Shea who had just made his way onto the county team and was showing promise); there was not the same dedication and commitment to training in Mayo as in other counties and socialising often took priority; emigration drained many potential stars from the county; politics – in terms of personal, administrative and national level politics – was too prominent in Mayo GAA and had a detrimental effect; and finally the players lacked self-belief.

In discussing the lack of self-belief, the curse, still did not feature. At that point I asked if the interviewees knew about it and if they had did they believe in it. While many admitted to hearing stories about the curse, every interviewee dismissed it and many remarked on how it was something they had only heard about since the 1990s.

Thus, rather than forming something of a meta-narrative throughout accounts of Mayo GAA, evidence from oral histories in the period 2009-2011 show just how far beneath the radar the curse was and how it was viewed simply as a superstition and a recently contrived nonsense. This highlights the extent to which the curse has grown in stature during Mayo’s recent All-Ireland appearances.

I suspect that if I was tasked with recording interviews in the county today, the curse would form much more of a talking point, though I wonder if any eye witnesses to the curse being cast at the 1951 homecoming would come forward. There are many people still alive with vivid memories of 1951, including as we know the remaining two players from that All-Ireland winning team – Paddy Prendergast and Pádraig Carney.

Surely, if the breaking of a crossbar in a match that did not feature Mayo is so memorable, the issuing of the curse that has prevented Mayo from attaining an All-Ireland title in over 65 years might have etched itself in some people’s minds. I would love to hear from anyone who remembers it happening; however in their absence perhaps the oral histories analysed here might go some way to casting doubt on what is increasingly becoming a self-fulfilling prophesy.

Dr Arlene Crampsie lectures in the School of Geography, UCD and is chairwoman of the Oral History Network of Ireland