Jack McCaffrey: ‘Croke Park is my favourite place in the world’ 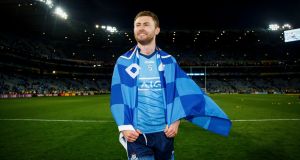 Jack McCaffrey takes a big comfy seat in the lounge of the Gibson Hotel and lets another one sink in, sip after delicious sip. Every player who wins again what they’ve won before will tell you they all feel different, and for McCaffrey that feeling is only beginning the morning after the night before, when Dublin completed the unprecedented and won that fifth successive All-Ireland.

It’s surprisingly quiet for such a historic aftermath and McCaffrey suits the mood, more reflective than giddy, less to do with the winning or indeed the football: it’s about the love and friendship for his Dublin team-mates and also the impact their winning may have on life outside of football.

“The aftermath definitely felt a bit special,” he says with that cartoon assassin’s smile, this also completing McCaffrey’s fifth All-Ireland to go with his full-time profession in medicine, all at the age of 25.

“They all feel special but it was one of those where you had to drag yourself off the pitch in Croke Park. You just wanted to stay there and soak up everything.

“There is no point saying otherwise, this is going to be a massive source of pride for us as a group when we look back at it. But the time to look back is when you have hung up the boots and when we meet up for a drink to watch the new young Dublin team going out and playing.”

For McCaffrey, Saturday’s win over Kerry was familiar in some ways. After shooting 1-3 in the drawn match he lasted only until half-time after straining his hamstring, which means he’s finished only four of the six finals he started (including the replay). Never a dull moment. He was sick as a dog before the 2015 final and still ended up footballer of the year; watched Dublin’s 2016 win from the stand after his selfless year of medical studies in Africa; and last year’s triumph over Tyrone coming one year after a cruciate ligament tear ended his 2017 final within four minutes.

What will last longer than any of the memories will be the love and friendships: “We did a bit of an exercise earlier this year, where we paired up and you said to the other lad what you respected in them. I was with Bernard Brogan and I just ended up saying to him in 25 years I can see myself texting you, ‘Will we grab lunch, will we grab tea?’

“Obviously, what brings us together is we’re decent footballers and playing well together but we have been on the road quite a while now and have gotten past that. What I love about this group is that I am really good friends with them and I have a deep, deep love for them, to be honest, which is something I can’t put into words.”

His work as a doctor gives him another perspective: he spent most of the year working with the paediatric unit in Our Lady of Lourdes Hospital in Drogheda, and is now based at Temple Street children’s hospital. The hours are challenging and he missed Dublin’s first training session after the drawn match but he wouldn’t have it any other way.

“People tend to say football is not important but when you go in and see these sick children trying to get better, I find it is the exact opposite. It emphasises just how important football is, to see families, and I am privileged in the position I am in, to see the journeys families are on, having really tough times and seeing the relief and joy they get from us playing football just boggles my mind.

“Temple Street is a little bit challenging but I have some great colleagues and I front-loaded a lot of my work and I had everything worked out to a tee and everything worked out nicely, but then we drew and that all went out the window. Jim has always sworn by work taking priority and your personal life taking priority and football slotting in after that. It’s going to be even more challenging in the near future. But, for the moment, I’m really enjoying both and they’re going okay.”

His performance in the drawn game brought different sorts of pressures for the replay, and McCaffrey doesn’t deny it, for himself or the team. “Whatever about the actual performance, it’s very hard to put into actual words the energy that goes into an All-Ireland final. And half of it is the energy you expend trying not to get overly excited in the build-up to it. Then you play the game and you’re flat afterwards. For the next week if anyone asked me to kick a ball, I emotionally wouldn’t be able to go out and play a game of football.

“Your two days post possibly the biggest game of your entire career and at the same time you’re 12 days away from an All-Ireland final and you’re trying to square those circles and it is very difficult.”

By Saturday evening he was smiling again, his relaxed body language in the pre-match parade now part of his routine. “I’ve said it before, it’s my favourite place in the entire world. To be walking around Croke Park. I like to think it’s the only time, really, you’ve no responsibilities. You’re just soaking in the moment and realising that you’re living your dream.

“You see that a lot in life that people don’t get to where they want to get to. And we’ve all been lucky enough to get to do that. If I walk around smiling in the parade and I play well, then it’s the best thing in the world.

“There’s a lot of bias when you’re sitting here, the day after winning an All-Ireland, and the horrible sessions where you’re thinking about quitting football are distant memories. But I’ve loved every second, there’s very little I would change.

“What I also appreciate is there’s a lot of hard work put in by people who don’t get to play. So it’s well worth putting the hard work in when you get to parade around Croke Park, in front of 80,000, floating on a cloud going around the place. But it’s the people who put in the work and don’t get to experience that, and do that anyway, to facilitate us. That’s really admirable.”

The influence of his father, Dublin’s 1988 All Star defender Noel McCaffrey

“Everything I do has been influenced heavily by my father. I watched in the lead-up to the first final highlights of the 1985 All-Ireland final that Kerry beat Dublin and the image at the final whistle is my father collapsing to his knees distraught and he was very unfortunate never to win an All-Ireland. I rarely get to say this to my dad, but I occasionally do, that I admire him so much. And if I can be as principled and passionate and loyal as he is, in my adult life, I’d be very happy how I turned out.

The possible retirement of Stephen Cluxton after his ‘wave’ goodbye

“Ah, Stephen Cluxton is a big softie. I don’t think this is the time to talk about it and if anyone does decide to do so then more power to them. The commitment involved in this is no laughing matter but when you are enjoying it and you are in the height of it, there is no better place to be.”

The pressure of winning a first five-in-a-row

“I’m not bullshitting ye here, it just wasn’t an issue, the five-in-a-row stuff. We would have mentioned it at the start of the year a bit, because we are all clever people, and we all live in the real world and it was out there. So we addressed it, brought the elephant into the room and talked about it. ‘That’s pretty cool, isn’t it?’ Now, park it and game, game, game.”

On the return of Diarmuid Connolly

“I remember the session he came back, I was beaming, delighted to have him back. These are some of the best friends you’ll ever meet. I spend more time with the Dublin footballers than I do with my closest friends, probably than I do with my family. Without getting too emotional about it, I know things about the Dublin footballers that I don’t think anyone else in the world knows. I’ve spoken to the lads about things that I’ll never speak to anyone else about.”

1 World Rugby study advises removal of reset scrums to reduce Covid-19 risk
2 Ken Early: Liverpool fans, Bamber Gascoigne and a close shave in Istanbul
3 As news gets better, can the pull of The Field be resisted?
4 Sideline Cut: Vignette shows why Bird is the true shark in The Last Dance
5 How Mary Pierce stepped into the light and played for herself
Real news has value SUBSCRIBE