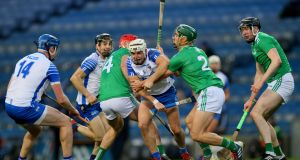 Nickey Brennan is hopeful the leagues can begin in March and the new rule will be first trialled before championship. Photograph: James Crombie/Inpho

Opponents of the new rule aimed at eradicating aspects of cynical play in hurling and football may have been silenced by the decision at GAA Congress at the weekend, only the debate itself is likely far from the over.

The proposed sanctions – awarding a penalty against and a sin-binning for any player who prevents a goal-scoring opportunity by committing one of a number of cynical infractions within the 20-metre line or its arc – haven’t yet been trialled in any games up to this point, for now the rule also only adopted on a one-year trial basis.

Watching Congress remotely with interest was former GAA president Nickey Brennan, in part because his county, Kilkenny had expressed their opposition to the rule, along with other leading hurling counties Galway and Limerick; for Brennan, who spent two seasons as Kilkenny manager prior to Brian Cody and was a two-time All-Ireland winner on the field of play, the rule may well take some time to bed in but the need for it was nonetheless pressing.

“Firstly I was in favour of the rule, saw the benefits,” says Brennan, who served as GAA president from 2006. “And while there was some opposition at county board level (Kilkenny chairman Jimmy Walsh argued the punishments were excessive), Kilkenny didn’t speak against it at Central Council level, and Ned Quinn, (as then) chairman of the CCCC, would have seen firsthand some cynical play.

“I also thought some of those who were speaking against it, starting off their arguments by saying ‘well I’m not in favour of cynical play, but . . .’ put themselves on the back foot. The reality is there were incidences of cynical play, and why was there such a huge shift in support from this time last year, to meeting the 60 per cent in favour this year.

“So I wasn’t totally shocked, going on what I was reading, what people were saying. Still to reach 60 per cent support of any motion isn’t easy, especially given the turnaround from last year, but I genuinely believe people were influenced by what they saw during the course of the last year or so, I think people thought the game was going into an area and shouldn’t be allowed to go.”

With a three-fifths majority of support required, the motion was only narrowly carried by 61 per cent of delegates. Adopting it on a one-year trial basis may create further debate; normally such a rule may have been trialled in pre-season competitions, yet given the enduring uncertainty around whether or not the league will get up and running before the championship, it’s possible the first test will come in the white heat of that championship.

“That was a point of criticism,” says Brennan, “and to be fair to those pre-season competitions, which have been blown out of the water now given the way the split season has gone, they were always useful for trying out new rules of one kind or another even before the league.

“So that’s all to be played out this year, whenever we do get back playing. But it is in the rulebook, for now, and the onus is now on team managers to look at the rule and develop different tactics to counter-act a player who is coming through on goal. Look at some at the examples that Michael Duignan (Offaly chair) gave at the weekend, JJ Delaney’s Hook on Séamus Callanan was mentioned, look at the great skill that there is in preventing an opposing player a goal, in a legitimate way.

“So for hurling managers at all levels, it’s up to them now to put on their thinking cap, because the loss of a player for 10 minutes, and a penalty conceded, is going to be a fairly serious penalty for any team who gets into that scenario, and could be game-changing in some respects.”

Give the spate of technical issues (which in some instances prevented video footage showing examples of cynical fouls that prevented goal chances being shown sufficiently) it was uncertain right up until the vote which way it would go; again Brennan believes Congress made the right call.

“I do think this rule was one that was coming, given the cynical play a lot more arms going around the body in the game of hurling, especially where the player was coming in on goal, rugby tackling almost, that kind of thing, so I do think that had to be addressed. I think it will make for a more open game, and we’re likely to see more goals, which hurling needs, to be honest.

“Let’s see, I think it will be justified, I think we’ll see incidence where the rule is called on, but like any sport some will be considered to be called harshly and others being absolutely the right call. As long as we have rules and as long as we have people watching opposing teams the one sure thing is we won’t have everyone in agreement.”

As for when exactly the new rule will be first trialled, Brennan is also hopeful the leagues can begin in March: “I’d be hopeful that post-St Patrick’s Day there will be a reasonable case for getting players back training, of course all of that is contingent on getting our (Covid) numbers down, we’re struggling to get them down at the pace we’d like, but it wouldn’t be unreasonable for inter-county teams to go back into training in the manner they did before the championship, in a controlled environment.