Challenge match in Navan is in aid of soccer attack victim raises €80,000 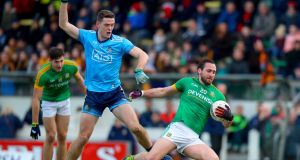 Sean Cox and his family have tough days both ahead and behind them but for an afternoon in Navan, they at least had this. A shade of 4,000 people came through the gate to watch Dublin and Meath play out a competitive challenge game in support of the Dunboyne man who is recovering from catastrophic injuries sustained when he was attacked while attending Liverpool match last April. Though it didn’t particularly matter who won or lost, the teams nonetheless did him the honour of providing an endgame that felt like it mattered a great deal.

When all the figures are totted up, the St Peter’s, Dunboyne club reckon the match will have raised around €80,000 for the Sean Cox fund. Members of his family were present in Páirc Tailteann to watch Meath and the Dubs go at it, with Andy McEntee’s side getting everyone up of their seats by scoring the last four points in a row to grab a 0-16 to 1-11 win.

“Today is a particularly emotional occasion for us given Sean’s deep interest in GAA and his close association with both Meath and Dublin,” said Martina Cox, Sean’s wife. “Sean himself would have relished today’s game and it is poignant that as he continues on his long road to recovery, that he is unable to be here in person.”

As far as the on-pitch doings went, it was all of what you’d expect from a December kick-about. Nobody got too excited and the pitch was never in danger of water-logging from the sweat levels. Both sides had a sprinkling of their presumed first XVs here, with Meath welcoming former All Star nominee Mickey Newman back to the fold after a year out of the panel.

For the Dubs, newly-crowned footballer of the year Brian Fenton put in a handy hour and Jim Gavin gave run outs to front-liners Eoin Murchan, Brian Howard and Niall Scully as well. Otherwise, this was a mixture of established panellists like Eoghan O’Gara and Eric Lowndes and up-and-comers such as Stephen Smith and Paddy Small.

In all, there were 18 substitutions, 11 by Dublin alone. As far as impact went, Meath were probably better served by their bench. For a start, Graham Reilly was parachuted in after an injury in the warm-up ruled out Meath’s starting centre-forward. Despite having played in Saturday night’s O’Byrne Cup game against Longford, Reilly was in fine fettle here and scored three very Graham Reilly points from play. For the Dubs, only Conor McHugh made any great shape when he came in.

“Everybody was aware of the situation with Sean,” said McEntee afterwards. “It’s like anything - these things come from an innocent enough start and we said it would be a good opportunity to raise a few quid. And the position I’m in and Jim [Gavin] is in it seemed like an reasonable idea. There was no issue at all - it turns out Jim is quite friendly with Sean’s brother Martin so as soon as it was mentioned it grew legs from there.

“We went through phase midway through the second half where we made a lot of bad decisions and gave away a lot of simple ball. And in all fairness a few subs came in and added impetuous, the lads came in and affected the game pretty well and we got the last four points, did we? That’s positive.

“I thought there was a pace to it overall. Any Dublin side that comes out, I recognise a lot of them there are a couple of Ballyboden fellas there and there are all pretty decent players. You’d have to accept they haven’t been working together so I wouldn’t be getting carried away just yet.”

Meath had the better of the first half, with Reilly, Newman and Bryan Menton all swishing over picture-book scores in the service of a half-time total of 0-8. The Dubs put together a couple of nice moves themselves, with Conor Mullally and Seán Bugler getting on the end of slick one-two hand-passing moves to grab a score apiece.

It all added up to a three-point lead at the break for Meath, which Reilly extended to four almost immediately. The young Dubs roused themselves with impressive points from Lowndes and midfielder Darren Gavin before Ballyboden defender Robbie McDaid stole forward for a smartly-taken goal. “The closest he got to a goal in the three years I was there was the other end of the field,” cracked his former club manager McEntee.

It looked for all the world like Dublin would close it out from there but the weight of the changes told in the end. None of their All-Ireland panel was on the pitch by the end and Meath dominated the exchanges over the last 10 minutes. Corner-forward Bryan McMahon banged over a point off either leg and wing-back Niall O’Kane nailed the go-ahead score as the clock ticked 70.

Meath saved the best for last, forcing a turnover in their own full-back line deep in injury-time before putting together a length -of-the-field move that ended with Newman splitting the posts and bringing the Navan crowd to their feet.