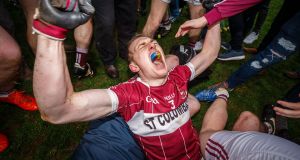 Choirs of angels will need to turn the volume up in the skies around north-east Longford in a fortnight’s time if they are to be heard, as chances are that the new AIB Leinster club football champions will still be making plenty of noise in Mullinalaghta.

The statistics of the coup are already well aired. The half-parish on the border of Cavan with its population of 447 was facing up to the might of twice All-Ireland champions Kilmacud Crokes and their membership, conservatively pitched at 10 times their opponents’ population.

For further context, when the counties met in the summer’s Leinster championship, Dublin had 19 points to spare. The Spartans were better odds at Thermopylae.

There was also a mild sending-off controversy when referee David Gough showed Mullinalaghta’s James McGivney a second yellow card in the 64th minute but didn’t follow up with a red. McGivney did leave the pitch shortly afterwards, as did Kilmacud’s Cian O’Sullivan, also for a second yellow.

It was Gary Rogers, whose extraordinarily calm penalty in the last minute of normal time effectively won the match, who gave a matter-of-fact insight into his team’s eve-of-battle epiphany.

“Last night we looked at a few videos of Kilmacud. It was only last night we kind of realised, we might actually give them a go. Man on man, when we went 15 on 15 it just worked for us. In fairness they missed a bit. We missed a bit in the first half but we got the rub of the green then and got the penalty and look, I put it away.”

Kilmacud goalkeeper David Nestor had saved a penalty in injury time in the semi-final and Rogers hit his kick in the same direction.

“Yeah, that side, but I always pick a different side anyway so it didn’t really matter. I just said I’ll hit it as hard as I can and if he saves it, fair play to him. I hit it as hard as possibly could. I seen the lad for Portlaoise; in fairness, it was a great save. Just delighted that it went in.”

So it was that on the 50th anniversary of Longford’s only senior provincial title, the county has added the club equivalent. Just as in 1968, they will face Kerry opponents in the All-Ireland semi-final, in this case the other Crokes – of Killarney.

For manager Mickey Graham it guarantees a busy spring. Recently appointed manager of his own county, Cavan – who face a daunting return to Division 1 of the AFL – he will have the added responsibility of preparing the club for a tilt with the 2017 All-Ireland winners.

“Yeah, the show goes on, but I’m not going to worry about that now at this moment in time. I just have to sit down and gather all my thoughts and let this settle in, because this is going to be one hell of a party over in Mullinalaghta for the next week and up to Christmas because of this. For this club to do it is a fairytale.”

He singled out his full back Paddy Fox for praise after an afternoon keeping Dublin’s All Star forward Paul Mannion scoreless from play.

Kilmacud manager Robbie Brennan was realistic after what was a gravely disappointing defeat for the favourites.

“To be fair, I think Mullinalaghta probably deserved it. We didn’t play well so I don’t think we can have too many complaints really after it.”

1 Séamus Power rockets into share of clubhouse lead in Detroit
2 Welcome to Iten in Kenya – home of champions and cheats
3 Monica Seles: The warrior queen who could have been the best ever
4 Red Bull poised to protest over Mercedes’ new steering system
5 Billy Morton’s Santry Stadium a beacon for sporting endeavour
Real news has value SUBSCRIBE