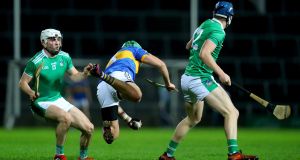 The winter solstice has yet to dispel its gloom, Santa has yet to deliver his presents and the schools are not yet done for the year, but in true GAA fashion the 2019 hurling season was unwrapped on Friday night, fittingly, in the home of the All-Ireland champions.

Christmas music rocking over the PA before throw-in added to the slightly unreal feel of this fixture, as the famine-ending Limerick hurlers took to the Gaelic Grounds for the opening gambit of next year’s Munster Senior Hurling League.

Limerick entered the fray in front of 3,224 against Tipperary with eight of the heroes who started August’s All-Ireland triumph, including captain Declan Hannon and hurler of the year Cian Lynch. The veterans of last season’s wave-cresting campaign were eager to prove to their bosses that they celebrated wisely, and not too well, while the fringe artists will be hoping for more airtime in the bigger fixtures come spring and summer.

Whatever exertions they went through in recent months, they still managed to look sharp enough in this pipe-opener, although the first half wide count (11, a more economical two in the second period) won’t be a source of comfort and joy to John Kiely.

Colin Ryan, with a number of fine points from play, Aaron Gillane and David Reidy caused many problems while the backs largely contained the Tipp threat.

Tipperary, for their part, have even more to prove after they failed to fire in the inaugural Munster round-robin. Just six of the starters in their last championship game, that topsy-turvy defeat to Clare, were named for the throw-in by returning manager Liam Sheedy, although others featured at different stages while the bench was warmed by men like Cathal Barrett, Padraic Maher, Bonner Maher and Jake Morris.

As ever, Tipp’s forwards can hit prolonged flat spots before bursting into action and so it was on Friday: after a penalty goal within the first minute by Seamus Callanan, they were kept ticking over by placed balls before two goals in as many minutes - first Callanan finishing off an angled solo run from the right by hammering low to the net, and then under-21 graduate Mark Kehoe availing of two eye-catching passes by Jason Forde and Callanan.

In the second-half, the visitors kept at it, Patrick Bonner Maher goaling with his first touch after coming on, and Callanan kept the scorekeepers busy, ending up with 2-8. Ronan Maher, starting at centre-forward and ending up in the middle, got two nice points from play.

David Reidy got Limerick’s first goal in the 46th minute when he made the most of excellent passing from his half-forward colleagues.

The Tipp backs can be pleased enough with how they kept the goal chances to a minimum for much of the game while goalkeeper Brian Hogan weighed in with a couple of decent saves late on before Aaron Gillane raised Limerick’s second green flag with an unstoppable shot.

While proceedings remained lively to the end, unsurprisingly there was none of the crackling intensity we can expect when the days get longer.

The champions defeated, so, but nothing to cause sleepless nights as bigger occasions approach. They take on Kerry in Tralee on Thursday night, clearing the way for the post-All-Ireland team trip to Mexico shortly after Christmas.