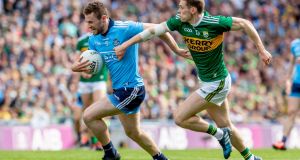 Jack McCaffrey: “I don’t think he [Farrell] is under any illusions about the pressure-cooker environment he is coming into. He is a fantastic fella to deal with it in my experience. I think he will fly it.” Photograph: Morgan Treacy/Inpho

Jack McCaffrey didn’t see it coming when he sat down at the Innisfails GAA club on a Saturday in late November. Summoned to a meeting of the Dublin squad he watched as Jim Gavin explained that after six All Ireland titles, a record five in succession and 21 major trophies in total, he had decided to step down as Dublin manager.

Recalling that occasion, a couple of days before Gavin’s successor, Dessie Farrell takes charge of his first match, an O’Byrne Cup semi-final against Longford at Pearse Park, McCaffrey conceded that “surprise” was the overwhelming emotion in the room.

Sport moves on and for those still involved it is the future rather than the past that becomes all-consuming, as it has to be. McCaffrey, speaking as a brand ambassador for Denis Mahony Toyota, explained: “I’d be very reluctant to talk of [Jim Gavin’s]) legacy because we’re still the same team. I’d hope he’d be very proud of everything he has achieved.

“For us, I suppose I’ll look back on my career as a whole when it comes to an end. There will definitely be chapters in it and a very significant one will be the Jim Gavin chapter. It’s all eyes on this year, now. Getting started under Dessie is really exciting. I haven’t afforded myself too much time to think about a legacy per se.”

McCaffrey’s experience of Farrell as a manager dates back well over a decade. “At an inter-county level, predominantly I was with Dessie from U-13 until I was about 20; and then Jim with a bit of overlap, from 19 to 26.”

Prior to departing on holiday last year’s Dublin panel met with Farrell. McCaffrey elaborated: “It was an introductory thing, him laying out his plans for the year, his philosophy, just introducing himself to everybody. And then it was, when you get back, we’ll start training in earnest.

“I know there have been a couple of trial games, an O’Byrne Cup game and then we’re pretty quickly into the league. I’m very excited about it. I know Dessie well and I’d like to think that I know a lot of what he’s about as a manager. At the same time he’s managed a lot of different teams since I was last under him, and I’m sure he’s evolved and changed, no more than any of us.

“He made it clear at that first meeting that everybody was going to get a chance and have a clean slate starting off. Knowing Dessie and how he always puts Dublin GAA first and foremost, he’s not going to have any personal preferences based on something we did together basically a decade ago.”

McCaffrey was reluctant to be drawn on the style of football that Dublin might play going forward – he doesn’t expect major changes – but did offer an overview on Farrell as a manager.

“Dessie was always very thorough and surrounded himself with really good people. He was very keen to know opponents really well, but also to focus on our own game, finding a style of football that suits us, and backing ourselves that if we get everything right on our end, then once we’ve done our due diligence on the opposition, we’ll toss the coin and see how that goes.

“I suppose the senior job is a little bit different to any others. The last time I was being coached by Dessie, I was a kid essentially. So, I’m sure there’ll be some changes and some differences. I’m quite excited to find out.

“I am sure there will be probably a few new faces. The dynamic of the group changes slightly every year as people come and go. A new manager is a big change. I am sure that Dessie will put his own slant on things.

“Likewise I can’t imagine that he will come in and rip down everything and try and build from the bottom up. I am sure that he will tweak things, put his own stamp on stuff. He will have some new ideas; dynamic wise, it will change slightly, but I think it will be the same core group.

“Dessie’s credentials are pretty outstanding. I always find it helpful when a manager has played the game at the highest level and, growing up, he was one of the legends that I would have looked up to. He knows what it is like as a player, he spoke about that in the meeting, to be a player under a change of management. He has that experience from our point of view.

“I don’t think he is under any illusions about the pressure-cooker environment he is coming into. He is a fantastic fella to deal with it in my experience. I think he will fly it.”

Farrell didn’t communicate at the meeting who his backroom team will be but that should become clearer over the weekend.

On a personal level, McCaffrey starts a six-month secondment next Monday at St Luke’s Hospital in Kilkenny that will take him up to July. He will be based in the city and commute.

“There will be a bit of flexibility around gym sessions and the odd kind of running session that I will do on my own down there.

“Obviously we have a new manager and there is going to be a few little changes as to how we are playing and it will be important to be linked in with the group as much as possible.”