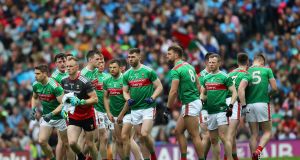 A Mayo motion set to come before Congress later this month could considerably widen the rule on both county and club eligibility for players not born within that county.

Motion 48 seeks to include legal guardians and not just parents, as well as allowing for “other relevant connection” as decided by Central Council.

This would see Rule 6.3 (Games & Competitions – Definitions – Official Guide Part 1) be amended to read as follows: “A player shall be considered to have an ‘other relevant connection’: (a) With a particular county if: (i) either of the player’s parents or legal guardians at the time of the member’s birth were permanently resident in that County. (ii) That county is the county of the first club of either of his parents or legal guardians.”

Or (b) with a particular club if: “(i) Either of the player’s parents or legal guardians were at the time of his birth permanently resident in the present catchment area of that club. (ii) In the case of a player whose parent(s) or legal guardian(s) were permanently resident in Co Dublin at the time of his birth, that club was the first club of either of his parents or legal guardians. (iii) County by-laws either define generally or for specific cases that particular factors give rise to such a connection.”

This would also mean giving Central Council “the power, in exceptional circumstances, to deem a player to have an ‘other relevant connection’ with a particular club or county in accordance with policy adopted Central Council.”

This in turn would mean amending Rule 6.9 (b) by inserting the following clause: “(iv) A player may declare for a county based on ‘other relevant connection’. With a particular county, as provided for under sub-section (c) of Rule 6.3, and the player’s declaration receives the sanction of the committee of his first county or own county, as applicable (see Appendix 4), subject to the player being over 18 years as defined in Rule 6.17.

Motion 19 from Central Council, if passed, would likely mean Dublin getting one game fewer at Croke Park in the Super 8s, with Phase 1 games at the All-Ireland quarter-final stage in football being played at a neutral venue for both teams.

1 Cheltenham faces criticism after racegoers suffer Covid-19 symptoms
2 Son Heung-min to carry out mandatory national service in South Korea
3 Ireland’s underage rugby stars miss out on chances to shine at Easter
4 World Rugby reinforce breakdown laws rather than change them
5 Karen Robinson Walton: I am looking at him. I say ‘Benjamin, what have we done?’
Real news has value SUBSCRIBE