Mary I make history with first ever Fitzgibbon Cup 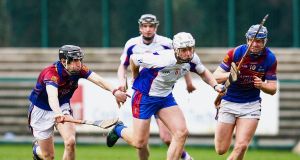 Two periods of extra time were required before Mary Immaculate College claimed their first Fitzgibbon Cup title with victory over UL at Cork IT.

Over a pulsating 90 minutes of hurling, the teams were level on no fewer than 19 occasions. Following the turnaround at the end of the first half of the second period of extra time (five minutes each way), it was 1-28 to 3-22, but Mary I had more in their legs, even without the services of Declan Hannon, who had scored 1-12 before departing injured.

When they won a scoreable free, Darragh O’Donovan did the needful and then Cian Lynch followed up with his fifth point of the game. Even then, there was time for UL to launch one final attack but Tom Morrissey – who had set them on their way with a second-minute goal in normal time – found his effort blocked by John Meagher and Mary I were champions.

Despite the tonic of Morrissey’s opener, UL found themselves on the back foot for much of the first half, with Hannon and Seán Linnane impressive in attack for Mary I while Ronan Maher excelled in defence.

The teacher-training college led by 0-7 to 1-3 at one stage, but needed an O’Donovan point to level at the break, 0-9 to 1-6, after a UL revival. Hannon’s goal early in the second half was quickly cancelled out by John McGrath’s, but then Mary I took control, scoring six of seven points to lead by 1-15 to 2-8.

That was the cue for McGrath to strike again, his second goal and UL’s third, with the Tipp star then levelling once more. They couldn’t find a lead score though and Mary I were in touching distance when Linnane and John Meagher pointed, only for McGrath and Tommy Heffernan to set up extra time.

It was the same in the additional 20 minutes, Mary I looking likeliest but Heffernan and McGrath tying the game. They finished with six points and 2-7 respectively, but Mary I didn’t leave their third chance go.