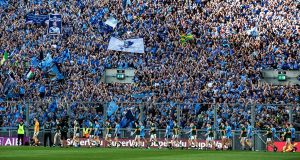 Dublin parade in front of the Hill ahead of last year’s All-Ireland final replay against Kerry. Photograph: Billy Stickland/Inpho

There were nine minutes to go in the third quarter last Sunday and the Philadelphia Eagles were somehow still in the game. Not just in it but in with a shout too. The LA Rams had outplayed them pretty much the whole way but now the Eagles had the ball on the Rams 21-yard line and they were only 21-16 down. A touchdown here and they would take a lead that had looked out of the question early in the second quarter when they had trailed by 21-3.

Eagles quarter-back Carson Wentz made a hash of it though and the Rams defence picked it off. It was exactly the wrong throw and precisely the wrong time, killing any momentum the Eagles had built up. It was the pivotal play in the game too - the Rams got the next score and went on to ease their way to a 37-19 win. It came as no surprise to hear a loud chorus of boos ring out as Wentz trudged off the field shaking his head at his mistake.

1 Man who loses bag with €40,000 of cocaine rings gardaí to report it missing
2 US presidential debate: who won, was it any good, were there any surprises?
3 Two hundred Irish retailers for all your online Christmas shopping
4 Irish far right groups trying to disrupt key State institutions and infrastructure, says Garda Commissioner
5 Sleeping father was unaware partner and baby dead until gardaí called to raise alarm
6 Diarmaid Ferriter: We have been infantilised with promises of Christmas
7 Emily in Paris: If it was Dublin, she’d be shifting Colm Meaney in the Leprechaun Museum
8 Gardaí use batons and handcuffs to quell anti-lockdown protest in Dublin
9 Hand sanitiser used in some schools can cause headaches and respiratory problems
10 Coronavirus search: How is Covid-19 spreading in your locality?
11 Level 5 lockdown TV: From The Crown to Dead Still, the ultimate guide to what to watch
12 Life under Level 5: Where can I go, who can I see, what is closed and what is open?
13 O’Gorman apologises for communication failure over mother-and-baby homes
14 Number of schools forced to close after hand sanitiser is recalled
15 Irish media needs to take a look at how it is covering pandemic
16 Sacha Baron Cohen: ‘My aim was not to expose racism and anti-Semitism. It was to make people laugh’
17 Young people ‘sick of being told what not to do’, says WHO’s Mike Ryan
18 Liam Neeson among new investors backing €100m Ireland Impact fund
19 Garda checkpoints turn motorists back, traffic volumes drop
20 Nphet now in control of the country’s economic and social policy
21 Restaurant turns shuttered €16,000 outdoor dining area into farm shop
22 Rising Time’s Shay Byrne is so glum he makes Morning Ireland seem cheerful
23 Colin Byrne: Hard to understand how golf has become the bogey man now
24 Dáil approves transfer of mother-and-baby home records to Tusla
25 Suzanne Lynch’s US Election Diary: Did Trump or Biden change any minds?
26 Golf and tennis clubs closed under Level 5 as deemed ‘non-essential’ services
27 ‘We thought he was gone’: Man (77) rescued at sea after trying to save dog
28 Irish duo set for AFL Grand Final as sport lifts the gloom Down Under
29 John FitzGerald: North needs reform more than unity
30 Jackie Tyrrell: Winter is here and a machine-gun Championship awaits
31 Guinness brings out a non-alcoholic version of the black stuff
32 Lockdown meals: 50 great Irish restaurant food boxes to go
33 UK seals first big post-Brexit trade deal with Japan
34 John Gilligan arrested along with two others in southern Spain
35 Farm lobby seeks EU ban on vegan ‘burger’ and veggie ‘sausage’
36 If lockdown has morphed from tactic to strategy, the State has failed
37 Lonely in lockdown? Get yourself a bottom-sniffer
38 Six Nations - Ireland v Italy: Kick-off time, TV details, team news, standings and more
39 Poots’ comments about Covid-19 would be funny if they were not so serious
40 Barbarians match in doubt after 12 players go on unauthorised night out
Real news has value SUBSCRIBE