Looking back on the Tipperary hurlers 1926 US tour 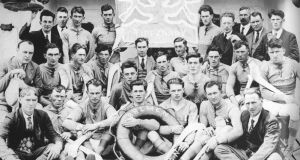 TheAll-Ireland winning Tipperary hurling team on board the SS Bremen on their way to America for a 1926 US Tour. 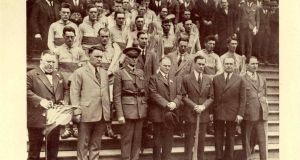 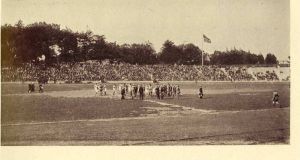 The team played a game in San Francisco as well as Boston, Chicago, New York and Buffalo.

They resembled soldiers leaving for war – without the khaki and the latent fear.

But these were hurlers, marching in formation to the music of a local pipe band and the cheers of well-wishing crowds. They were making their way to their departure point at Cobh from there they would be taken by tender to the SS Bremen, a huge, hulking German ocean liner that lay a short distance offshore.

It was mid-May 1926, and the mood was one of excitement, of giddy expectation. It couldn’t have been otherwise: this was at once an adventure and a mission, unforeseen and unimaginable just a few months beforehand. And it would change – yes, change utterly – the future lives of a number of the men embarking upon it.

It had started with a letter from one Tipperary man to another.

PJ Cahill, Holycross-born but a Chicago-based barrister, had written to Boherlahan’s John Leahy, the famed captain of the then All-Ireland champions, to ask if they would play a series of games to aid the promotion of the GAA in the United States.

Leahy was understandably enthused by the prospect. So too was Nenagh’s Frank McGrath, the chairman of the North Tipperary County Board, and, crucially, a member of the GAA’s Central Council, whose official sanction came only weeks before the team’s departure and only after reassurances were received as to the exact nature of the tour and the amateur status of their opponents.

Less accommodating was the government. Two civil servants among the intended travelling party were refused “special leave without pay” by the then minister for finance Ernest Blythe, whose imperviousness to pressure and lobbying brought down upon him the mild opprobrium of the GAA. After all wasn’t this whole venture as much about, as Frank McGrath put it, “advertising a nation” as fostering national games?

This time it would be different.

At least there would be no prospect of bankrupting the GAA as the Irish-American promoters bore much of the upfront costs and covered all the financial risk.

For the travelling players their main responsibilities were simply to train “earnestly”, sort out their passport photographs and pack appropriately and light. But what exactly was appropriate?

Here the Chicago-based organisers were able to proffer some guidance: they briefed the Tipperary men in advance on the broad itinerary and each player was asked to bring with him four good hurleys, one pair of hurling boots, one spare suit of clothes, one small hand bag and one attache case.

To that list, Portroe’s Thomas Kenny added some writing materials and he assiduously maintained a tour diary that was published in book form two years later.

Ninety years on, it still makes for remarkable reading: one night on board the SS Bremen, for instance, Kenny wrote of how the players, who had overcome an initial bout of sea sickness, sang and danced and tried to inveigle some female German passengers to join them in a waltz and a two-step.

Eventually, in the early hours of May 20th, 1926, and after 10 days at sea, the SS Bremen approached New York City harbour: through the murk the New World appeared first as “a semi-circle of millions of electric lights”.

When the hurlers disembarked, they were in full playing uniform – jerseys, shorts and boots. They were met by a welcoming party of local Irish societies and a fleet of motor cars, Tricolours fluttering from their bonnets, which whisked them in a procession to City Hall, where they were formally welcomed by the flamboyant, scandal prone Jimmy Walker, the lord mayor and himself a scion of Irish immigrants.

That was just the start of it. The hurlers spent the following days on a social carousel, shoulder-rubbing with movers and shakers – cardinals, judges, labour leaders and politicians.

At a banquet hosted by the Tipperary Men’s Associations of New York and attended by hundreds of Irish-Americans, the spread was so sumptuous that Tim Crowe – a decorated former athlete who multitasked as tour trainer, masseuse and fiddle player–- was said to have grown pale at how well his charges took to the “corn on the cob”.

It was the same everywhere they went – in Boston, Chicago, San Francisco, Buffalo. Individually their opponents were fine players from strong hurling counties in Ireland. What they lacked was the kind of cohesion that came only from regular competition against the best teams, the kind that was readily available at home.

Of course, in many ways it was not about hurling at all, but the connection with that idea of “home”. It is true the games were pitched at wider American audiences by advertising the sport’s antiquity and inherent dangers – “Come for an eye-full of sport fifteen hundred years old! Arms and legs snap occasionally” – but it was, as expected, the ex-pat Irish for whom they proved the principal pull.

And the Tipperary men met them all: the rich, the connected, the respected and the homesick. For many of these exiled Irish the emotion of the gatherings proved overwhelming. At one game Frank McGrath, who acted as team manager to the touring team, was seated near a white haired man who, wiping the tear from his eye, gently remarked: “Good old Ireland I never doubted you.”

It wasn’t only the emigrants whose thoughts turned to home, however.

For the Tipperary players, men mostly from rural and farming backgrounds, travelling across the vast expanse of the United States opened their eyes to a new world of possibility that inevitably begged comparison with their own limited lot in Ireland.

On a train running westward through the state of Wyoming, Kenny scribbled incredulously in his diary: “No fences at all to be seen now and habitations of any kind not seen... Hundreds of miles of seemingly unowned or at least uncultivated land.”

Worse than that, in an unwelcome and poignant echo of the GAA’s 1888 enterprise, the county soon lost six of its summer touring party. Seduced by the promise of American life, they opted to return, to try their hand and put down roots.

The diarist Kenny and the tour manager McGrath were at Nenagh railway station to see off two of the departing emigrants. When the train pulled out, McGrath turned away from the platform to leave. He didn’t utter a word. He just shook his head.

Tipperary’s 1926 exercise in American adventurism encouraged others to follow in their wake. Even as the United States plunged into economic depression in the wake of the Wall Street crash of 1929, top GAA county teams, hurling and football, kept travelling westwards.

The games they played, widely filmed by the Pathé and Fox Movietone newsreel companies, were inclined to be less competitive than exhibition in style. Not always, mind. Occasionally, the swagger of the touring teams was upset by their emigrant opponents. The Kerry footballers were embarrassed by a New York selection in 1927. So too were Mayo in 1932. But that was with the big ball.

To many observers it was simply unthinkable that American-based hurlers could seriously challenge the pick of Irish talent. One reporter, who covered Kilkenny’s 1934 tour, went so far as to suggest that the glitz of urban American life was inimical to the formation of good hurlers. “America,”, he wrote, “is largely an electric-light country and its people bespectacled. Residence in the States robs one of that clarity and keenness of vision natural to residents of the Golden Vale, or the Valley of the Barrow.” It was an analysis which sat uncomfortably with the subsequent fate of the Kilkenny hurlers whose modest record on that tour read: one win, one loss and one draw.

For their part, the Tipperary hurlers returned to American shores as All-Ireland champions in 1931 where they once again enjoyed an unbroken run of success. By the standards of the time they were among the most widely travelled of Irish sportsmen. Previously, in 1927, they had also toured Liverpool and London, where they played exhibition matches against the Cork hurlers in an effort to raise funds to support the newly formed Provincial Council of Great Britain.