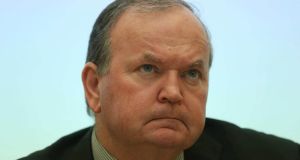 GAA President Liam O’Neill: “I don’t mind putting on record that I have never spoken to the CCC on any discipline matter since I became president. . . nor have I have commented to anybody in officialdom on the performance of referees.” Photograph: Donall Farmer/Inpho

GAA president Liam O’Neill has vehemently denied the inference by Armagh football manager Paul Grimley that both he and director general Páraic Duffy pressurised the disciplinary arm of the association to suspend players.

This goes back to the brawl before the Ulster quarter-final between Armagh and Cavan on June 8th. Following that incident three Armagh players – Brendan Donaghy, Kieran Toner and Andy Mallon – received one game bans. Two Cavan players – Martin Dunne and Feargal Flanagan – were also sanctioned with both county boards fined €5,000. Cavan accepted the punishment while Armagh lost both their hearing and appeal.

On Grimley’s insistence, players and management have subsequently refused to speak on the record although he spoke to the Newry Democrat on July 1st: “The media did, in my opinion, influence Liam O’Neill and Páraic Duffy and the CCC and put pressure on them and they reacted as they normally do. We were standing in an orderly fashion behind the band and we were attacked.”

Grimley was also quoted as saying O’Neill thought Armagh was the “easy target.”

O’Neill, speaking yesterday at the M Donnelly hurling Poc Fada launch, responded: “Páraic and I have no hand, act or part in discipline, the appointment of referees or match officiating of any sort.

“I don’t mind putting on record that I have never spoken to the CCC on any discipline matter since I became president. . . nor have I have commented to anybody in officialdom on the performance of referees.

“I just made the decision when I became president that we appoint people to do those jobs, I do my job and they do theirs. It would be wrong of either Páraic or I to do that and it just doesn’t arise . . .

“He [Grimley] made an accusation, I’m not sure why he did . . . I certainly had no influence whatsoever. I wasn’t happy with what he said.”

On the tactic of inter-county managers implementing media bans, O’Neill added: “All I can say on that is I think we all need to communicate. That’s the reason I do it with you this morning. It’s a two way street; if we want to get our games publicised we need to treat the media fairly. I have tried to do that since I’ve become president . . . The players benefit and it is a pity if that breaks down.”

O’Neill went on to express dismay about the way the alleged biting/fish-hooking incident in the Leinster football final was dealt with.

“The interesting thing about it is that there seems to be an unwillingness among players to talk about incidents like this after games. There is a kind of solidarity.”

“I would just wish that solidarity would manifest itself during the game as well. If there is such a tightness among players when these incidents happen, why doesn’t that extend to behaving on the field and not being involved in these incidents in the first place? That would make it easy on us all, wouldn’t it?”

“There is a rule in the German army, I think you have to wait 24 hours before you make a complaint. It gives you time to think out your position on it.

“The difficulty might have been the speed of the accusation because sometimes in the heat of the moment things aren’t as clear as they are when you give yourself a moment or two of reflection.”

The Central Competitions Control Committee did not investigate the incident any further due to insufficient evidence.