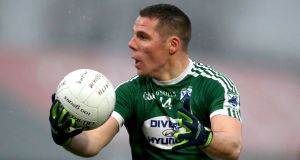 Gaoth Dobhair’s Kevin Cassidy: ‘We had a long campaign with county and Ulster, so we rested the bodies and then we were mad to get back’ Photograph: Bryan Keane/Inpho

There is an irony at the heart of how Kevin Cassidy assesses the complications of his football career. On the national stage he has won two All Star awards and a national league medal. He also picked up an Ulster medal in what surprisingly turned out to be his last season at inter-county level.

He is probably as well-known for being cut from the panel by manager Jim McGuinness at the end of that year, 2011, in an extraordinarily controversial punishment for co-operating with a book about that year’s championship.

Happily this past couple of months have fixed the focus back on the field of play where Cassidy, at 37, has been assisting his club, Gaoth Dobhair, in winning a first AIB Ulster football title and now he and they prepare for an All-Ireland semi-final against champions Corofin.

In the book that caused all of those ripples seven years ago, Cassidy explained that he had been about to quit the Donegal panel just before McGuinness took over but was persuaded otherwise.

Now, he believes that he is enjoying an exhilarating coda to an eventful career because of the premature conclusion to his county career, even though it cast him as an outsider when the county won the All-Ireland 12 months’ later in 2012.

“That was strange,” he says, “because I’d thrown maybe 10 or 12 years of my life in with Donegal. If you play county football, you’re all or nothing really. We had spoken about the great scenes and in Gweedore people like to enjoy themselves.

“We had spoken about what we’d do if Sam Maguire came back. So for me to be sitting eating Weetabix when it was passing my house was strange but I’m a great believer in what’s for you won’t go past you.

“If I had continued playing for Donegal, there’s no way I’d be fit to play (club) today. Someone up there was looking down on me because if you were offered the two (All-Irelands), club is the one you’d take.”

The club established an irresistible rhythm through late autumn and early winter. Gaoth Dobhair weren’t strangers to winning county titles but Donegal teams had been notable under-achievers in Ulster down the years, and only one other club from the county, St Joseph’s, had won the province and that came all the way back in 1975.

The celebrations were as might have been expected in those unique circumstances but Cassidy and the more experienced players, like Eamon and Neil McGee, understood that the novelty of their achievement also created challenges that went beyond navigating the celebrations. The most pressing one was the need to negotiate the enormous gap between the provincial and All-Ireland championships, stretching from the beginning of December to the middle of February.

"Directly after the game we sat down and we’re lucky we have a few older heads in the dressing room who can throw in their opinions. To be honest, the young lads would have battered on and trained away. You have to try to peak come Saturday so we took two weeks completely off; we didn’t meet for any training session; we tipped away with the gym.

“A lot of us have friends throughout Ireland who have been in this situation so we touched base with them to try to get advice on how they approached it. We think we got it right and our coach Micheal Boyle has us all in fantastic shape. We played a number of challenge matches and we feel we have the balance right.

“The likes of James McCarthy (Ballymun and Dublin), Eamon Fennell (St Vincent’s and Dublin) and the Crossmaglen lads – just bouncing it off them because they’ve been there and done that.

“The likes of the McGees have other friends who have been there so we just tried to see what was the best way to go forward, as it’s our first time, which is different to Corofin. We had a long campaign with county and Ulster, so we rested the bodies and then we were mad to get back.”

His own game has modified from the hard-running, physical wing back and centrefielder of his inter-county days into a cute, calculating full forward, still mobile enough to cause problems and clever in his use of the ball. His two points from play were key contributions in a low-scoring Ulster final, protracted by extra time, against Monaghan’s Scotstown.

He clearly enjoys the odyssey of his club – witness the ebullient, boisterous video posting online after the Ulster triumph – and the less ascetic lifestyle demanded away from the inter-county scene.

“When you step away from the county scene,” he muses, “it’s strange because you look back and you think, ‘would I do it again if I was asked?’ I’m not sure you would, well, I’m not sure I would.

“I’m sure teams do celebrate. It’s just that we’re so worried now about letting people see it, because it’s a sign of weakness or something, I don’t know what it is. The club’s different, we’re all friends and nobody really gives a damn.

1 Tipping Point: Eddie Jones’s rhetoric is out of place in a febrile political climate
2 Ireland backrow of O’Mahony, Van der Flier and Stander to be retained against England
3 Triple bogey costs Rory McIlroy as Adam Scott prevails at Riviera
4 Wexford best the weather and Kilkenny on a mad day to be hurling
5 Solskjaer unable to say if Paul Pogba will play for Manchester United again
Real news has value SUBSCRIBE