Joy for Carlow as Antrim routed in Croke Park 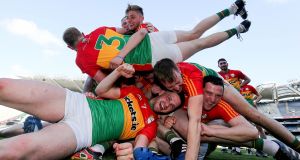 Carlow are gearing up for an All-Ireland SHC qualifier clash with Laois, their reward for a third Christy Ring Cup success.

In a Croke Park goal-fest, they routed Antrim, and it was a dream day at GAA headquarters for James Doyle, who smacked in four goals for the Leinster side.

As if a first-half hat-trick wasn’t enough, he drilled home his side’s fifth goal to finally kill off the Saffrons.

Denis Murphy was another man with the golden touch, his accuracy from frees giving him an 11 points haul and a big say in the outcome.

“When you get to Croke Park, you like to bring your best hurling with you,” said Carlow manager Colm Bonnar.

“I think we’ve learned more from Antrim than any other team – how they’re able to keep the ball alive, keep it moving, and how to work your way into scoring opportunities and make the most of them.”

Carlow led by 3-12 to 1-7 at half-time, the Antrim goal coming from Eoin Campbell, whose scrambled effort lacked the class of three immaculate Doyle strikes at the Canal End.

Ciaran Clarke grabbed a couple of second-half goals for the Ulster men, but they could never get close to a Carlow side playing with joy and attacking flair.

Martin Kavanagh’s goal kept Colm Bonnar’s side well ahead, despite a fast reply in the shape of a Neil McManus goal from a free.

And after Doyle had banged in his fourth, Antrim had Eoghan Campbell sent off on a straight red card.