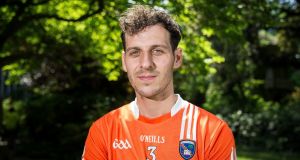 Jamie Clarke: opted out for the entire 2016 season but re-established himself during Armagh’s league run this year. Photograph: Gary Carr/Inpho

Jamie Clarke will make his first championship start for Armagh since 2015 when starting at corner forward in Sunday’s Ulster football quarter-final against Down.

Clarke opted out for the entire 2016 season, spending much of last summer in New York, but returned at the start of this season and quickly re-established himself during Armagh’s league run.

Clarke made his quite sensational debut for Armagh in 2010 coming off the bench to score the decisive goal in the Ulster preliminary round win over Derry. Inconceivably as it sounds Armagh have only won two games in Ulster since – the 2011 quarter-final against Down, and the 2014 quarter-final against Cavan. Charlie Vernon is named at full back, Rory Grugan will captain the team at wing forward, while Stefan Campbell and Andrew Murnin join Clarke in the full forward line.

Despite the somewhat unconvincing five-point win over Wicklow, Kelly has opted for the same starting 15, with one positional switch: Cooley Kickhams’ Darren Marks has been moved back to the half-back line from right half-forward in a switch with Anthony Williams, who will don the number 10 jersey against the Royals this weekend after having been black-carded the last day.

In hurling, Clare forward Niall Deasy has been ruled out of Sunday’s Munster senior hurling championship semi-final against Limerick with a hamstring tear.

The Ballyea player, hugely influential in his club’s march to county and Munster honours last year, suffered the injury two weeks ago, and was expected to make the match-day panel before injury struck.

Elsewhere, it appears Tyrone’s All Star Mattie Donnelly will escape punishment for his apparent tangle with Derry’s Chrissy McKaigue in last Sunday’s Ulster football quarter-final. Referee Maurice Deegan took no action after Donnelly appeared to raise his hand towards McKaigue during the second-half of the Tyrone’s 11-point victory, but after video evidence from the incident at Celtic Park was inconclusive, no further action is expected.

It has also been confirmed that Tipperary goalkeeper Evan Comerford’s appeal against a 12-week suspension will now go before Munster officials.

Comerford was expected to go before the county hearings committee this evening but his case has now been referred to the provincial body – and could be heard over the weekend.

As things stand, Tipperary manager Liam Kearns is planning without Comerford for the Munster football semi-final with Cork tomorrow week, and the player won’t be eligible to return until mid-August.

In women’s football, All-Ireland champions Cork will be without a number of key players, including dual stars Rena Buckley and Briege Corkery – for Sunday’s TG4 Munster ladies senior championship opener against Waterford. Also missing will be the O’Sullivan sisters, Ciara, Doireann and Roisin.

Captain Ciara and Roisin took the opportunity to go travelling before the league final and both are still unavailable. And Doireann, who lifted the League trophy on Cork’s behalf in Ciara’s absence, has suffered a recent knee injury and manager Ephie Fitzgerald indicated that the Mourneabbey star will be out of action for the next six weeks.

The absences of Buckley and Corkery has cast fresh doubt on their futures with the Cork footballers. Buckley is currently captain of the Cork senior camogie team and may not be in a position to commit to football this year, while Corkery has not played in either code to date in 2017.