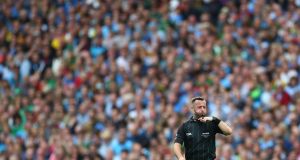 2019 All-Ireland final referee David Gough has said he does not wish to be considered for match appointments while social distancing is still in place. Photograph: James Crombie/Inpho

Some intercounty referees have been expressing concerns about the GAA’s return to play. Donal Smyth, the association’s National Match Officials Manager says that whereas he appreciates their position, he has urged them not to rush any decisions.

His comments come after last weekend’s announcement by All-Ireland football final referee David Gough that he did not wish to be considered for match appointments while social distancing remained a public health recommendation.

“There have been concerns and a few referees have been on to me and I have said, ‘hold on a moment - don’t rush into this’. I understand that there are legitimate concerns and for some issues at home and this is very much a voluntary matter with opt-in and opt-out.

“I say to them though, ‘if you’re not happy, that’s fine but don’t forget that we’re in a situation with challenge games at the moment. That’s for the next 14 days so see how they pan out and have a look.

“‘Then most counties are going to have a couple of league matches. See how they go and then county championship will be starting at the end of the month. Work it out for yourself and address the risk you perceive for your own circumstances.

“‘If you get more comfortable and there’s no spike in cases you’ll be more confident. If not, it’s entirely up to you’.”

Smyth is cautious about the GAA’s structure for the intercounty championships, because: “we’re taking nothing for granted with the pandemic situation,” but believes that if the proposed programme goes ahead that refereeing will not be a problem.

“We’re upskilling as we go every couple of weeks on different aspects of refereeing,” he says. “There was also team work and keeping in touch with each other for a good cause with the Pieta House run in May.”

Current figures are based on the national league referees’ panel and comprise about 70 officials and there is no decision yet taken on championship rosters.

“We’d 18 on the football panel with six auxiliaries and then we had 14 on the Joe McDonagh and Liam MacCarthy panels in hurling,” according to Smyth, who adds that the National Referees Committee will make a call on this year’s panels later and bearing in mind that there will be two series football league matches to be played in late October before the championship gets underway.

The annual fitness tests for referees have yet to be scheduled but are likely to come a couple of weeks before the championship’s opening weekend, on October 17th.

“We had it set up this year for April 17th and 18th because the league would have been over since the end of March and the early championship games were due at the start of May. Fitness tests and all would have been two weeks before that.

“The committee has yet to decide when we go ahead but it’s likely to be at the end of September.”

In the meantime he and the NRC are recommending that interested officials build up as much practice as they can with the roll-out of club fixtures currently in progress.

“We’d like to see referees taking on as many club matches as they can. To get back into an intercounty set-up you need to at the pitch where you’re ready to go. The rules don’t change no matter what level you’re refereeing at even if the pressures and how you deal with them are different so you get into good practice.”

More immediately, there are other challenges for Smyth, who is in his first full year in the role.

“Our main focus at the moment is on club referees. They need support in relation to the new rules - remember them! - as well as safety protocols for the return to play. You can’t worry about what’s coming next - simply deal with what’s in front of you.”