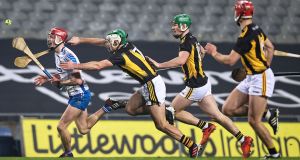 Jack Prendergast of Waterford tries to get clear of the challenge of Kilkenny’s Paddy Deegan during the All-Ireland SHC semi-final at Croke Park. Photograph: Tommy Dickson/Inpho

A scattered assortment of stadium operatives, media and the two entourages from Kilkenny and Waterford found themselves in the privileged position of being in Croke Park on Saturday night to witness another All-Ireland semi-final epic.

In the eerie setting of the now familiar, empty stadium, with chill winter replacing the fever pitch of traditional championship evenings and instead of the summer sun, a bright moon looking down, Waterford dredged up an ethereal second-half performance that gave the county its first ever semi-final win over the neighbours and a first victory in the fixture at Croke Park since 1959.

It took boundless athleticism, some terrific play and above all, unrelenting nerve. Think about pre-match attitudes. Kilkenny had topped up the almost preternatural aura of invincibility in the Leinster final, courtesy of the restored Richie Hogan and the eternal TJ Reid.

Waterford were worthy, exciting - maybe even a bit more - but for most people, they weren’t the Identikit of who was going to hand Kilkenny a first All-Ireland semi-final defeat in 15 years. There may have been plenty of earthly logic to give them a chance but it just wasn’t going to happen!

The counties’ relationship had always been one-sided and given how such things matter within Gaelic games, it was a mental obstacle for the Munster finalists. More to the point, there was the physical challenge of playing three successive weekends and four in five.

Having looked in the first half like further data for the debilitating effects of such scheduling, Waterford came out transformed from the dressing-room and managed to reassemble their energetic game plan and set about the Leinster champions, as if they had been switched from a dying battery to the mains.

Jamie Barron, like most of the team, had been fitful and out of sorts but he literally raced into the contest and the familiar bursts of pace and hard running suddenly began to put pressure on Kilkenny.

Stephen Bennett, like Dessie Hutchinson beside him in the full forward line had suffered up until then from inadequate supply but hadn’t been able to do much to make it happen for himself beyond the usual free taking that kept the team afloat.

After half-time he became a scourge. Two minutes into the resumption, a mazy run looked to have led to nothing when he lost the ball to Huw Lawlor’s hook but a vicious pull of the ground whipped the ball into the Canal net to declare the match back in the balance.

Austin Gleeson’s generally aimless demeanour was replaced with enthusiasm and ball winning and four dazzling points from play. Kilkenny were reeled in and had no real answer.

Eoin Cody’s point shortly after half-time had put them eight ahead, 2-12 to 0-10, but it took Waterford barely quarter of an hour to pay off the deficit.

Hutchinson was suddenly regularly free of the hitherto iron manacles of Conor Delaney and threatened with every possession. Points and frees ensued. Gleeson popped up everywhere shooting points from left and right; Bennett looked like he was seeking extra for artistic impression with a couple of scores from daunting distances and angles.

In the blizzard of scoring, it was Gleeson who settled the account in the 50th minute at 1-18 to 2-15 and on they went.

TJ Reid stood on the burning deck and his flawless frees kept them in it as Waterford came on in frenzied waves of attacks.

But the energy wasn’t there. Reid kept the match open on the scoreboard but every time Waterford had possession they threatened scores. Kilkenny did get to the final water break just three in arrears and hopes of getting a bounce from the newly introduced time for reflection rose when Reid scored immediately on resumption.

It was just a palliative. Still, you never know with Kilkenny. This time, however, there was no study in escapology. The benches had contrasting impacts. Brian Cody had rolled the dice by dropping his captain Colin Fennelly and Walter Walsh and starting Hogan.

Called in for what was now emergency work, Fennelly and Walsh couldn’t throw the switches. Nobody could. In contrast Waterford harvested 1-3 from their replacements.

Darragh Lyons’s goal with nearly an hour gone came like a thunderbolt after heavy rain. It came from tireless work by Jack Fagan, the Meath émigré, who placed a good and inviting pass to the replacement and he raised the team’s second green flag for a five-point lead, 2-22 to 2-17.

It’s hardly worth noting that the Leinster champions didn’t go easily. Reid scored, and aid came from the half backs, as Cillian Buckley and Paddy Deegan chipped in but this was no ordinary challenge from across the border. It wouldn’t stop.

Example: Gleeson produced a collector’s item of a score that started with the rarest of preliminaries - beating Kilkenny to ruck ball and getting clear for a point.

The exultant shouts from the Waterford bench would have done justice to a decent crowd. Even Tadhg de Búrca, all fantastic composure and flawless vision this evening and all season, at the heart of the defence, came up for an injury-time point.

Contrast with the first half. Kilkenny had started so slickly, taking all their opponent’s flailing blows and hitting back surgically, precisely.

Sluggish and struggling to get any sort of dynamic going, Waterford were closed down by an alert Kilkenny defence. They snatched at chances and played wayward ball into the attack and looked every inch a team that had reached a bridge too far in what has been a exultant journey of rediscovery by Waterford, who went into the year not having won a championship match in three years.

They made bad worse by coughing up goal chances, with the inevitable consequence of doing that against Kilkenny: Martin Keoghan and then TJ Reid raised green flags in the 12th and 24th minutes.

Keoghan had swept in a rebound from Stephen O’Keeffe’s excellent save from Hogan, which redeemed his staying back a little too long when a long ball came over the defence. Reid then filched a ball from Conor Prunty and made unerring use of it. This type of a barrage helped to kill off Galway in the Leinster final and looked to have had the same effect here, as the margin remorselessly expanded.

There had been honest effort from Waterford - Calum Lyons battled to overcome his defensive pressures and gamely came up for two points to keep hope alive. But like a boxer clinging to the ropes for some sort of support Waterford could well have heard the bell at half-time with a feeling of relief cut with despondency.

Only Kilkenny’s inaccuracies had prevented the seven-point deficit being large enough to make the second half a formality.

Liam Cahill administered the smelling salts but even he must have been taken aback at the power surge and sheer splendour of his team’s response. The rest of us certainly were.

Back in a second All-Ireland final in four years, Waterford face the winners of Sunday’s second semi-final between Galway and Limerick - yes, there’ll be more.