Tipperary warm Thurles night as they put Dublin in their place 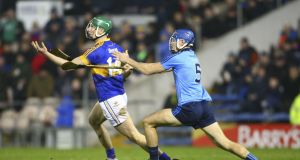 Winter hurling at Semple but Tipperary would warm you to your fingertips in the right mood. They weren’t quite at it all night here but the couple of spells when they were put Dublin firmly in their place. They had 14 points to spare over Ger Cunningham’s side but it could have been anything they liked. Life after Eamon O’Shea goes on.

It was encouraging stuff from Tipp, who are noticeably more direct under Michael Ryan. Or at least they were here, where a soggy pitch demanded it. They were quick to get the ball into the forwards, prizing speed of delivery over accuracy at times but not suffering unduly for it.

Jason Forde made a July’s worth of hay in the first half through no more complicated a tactic than loitering under the breaking ball and scorching through for scores. He ended his night with 1-5 from play – 1-4 of it came from tidying up loose ball around 40 yards from the Dublin posts.

The year still looked a bit new for Dublin. You wouldn’t have guessed to look at them that the Walsh Cup had cleared any cobwebs at all. Their oldest and rankest failings were all in evidence – slow build-up, no obvious scoring threat, heart-deadening misses when they got a sight of the posts at all. Paul Ryan missed three first-half frees, each of them a calamity to compare with the next. Tipp were more than decent at times but Dublin in this form wouldn’t have given a game to any of the teams in the division.

Tipp led by 1-9 to 0-3 at half-time. Forde banged in the goal after 13 minutes, skating on to hoover up the scraps after a Conor Gleeson puck-out dropped in a thicket of ash on the Dublin 45. Forde was onto it in a trice and his finish was low to Conor Dooley’s left corner.

Even at that stage, it was unclear where Dublin were going to find their scores. Dotsy O’Callaghan laboured manfully and struck a quality point from the right sideline soon after Forde’s goal but it was a lonely strike and Tipp followed up with the next five on the bounce. Noel McGrath gradually came into matters after looking rusty early on, his brother John had an equally rising graph through the game.

General self-respect demanded that Dublin make some sort of a shape at the start of the second half and to be fair, they matched Tipp point-for-point in the quarter-hour after the restart. Colm Cronin and Mark Schutte landed smart scores from distance and Niall McMorrow snapped up a couple of sharp points. With 20 minutes left on the clock, they were 1-14 to 0-9 behind – still not brilliant but at least they were scoring now.

It didn’t last. Tipp outscored them by 0-9 to 0-3 for the rest of the game. Bubbles O’Dwyer came off the bench to blitz them with three points from three attempts, newcomers Dylan Fitzell and Conor Kenny threw into the pot as well. Long before the end, it was training ground stuff in front of a crowd of 5,105.