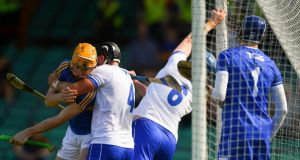 Austin Gleeson of Waterford catches the ball in the square, the umpires ruled the ball had crossed the line and awarded the goal, during the Munster GAA Senior Hurling Championship Round 3 match between Waterford and Tipperary at the Gaelic Grounds, Limerick. Photo: Piaras Ó Mídheach/Sportsfile via Getty Images

They were 11 points down, the noose wrapped around their neck, the entire season suddenly flashing before their eyes. Only a miracle could save Tipperary.

That it came partly in the form of a Jason Forde pot shot - caught cleanly just before the Waterford goal line by Austin Gleeson, rather than over it - hardly counts now. The one person who did believe it counted was the match umpire, to the left of the goalmouth, who without consulting with his colleague suddenly reached for the green flag.

And just like that Tipperary were breathing fire again. The goal stood, on 62 minutes, when for almost everyone else in the 10,237 attendance it clearly should not.

That wasn’t the only miraculous part though. Tipperary would play out the last quarter hour or so out-scoring Waterford 2-7 to 0-2, and for that Waterford must be wondering what they did to allow that, legitimate goal or not. So ended the latest helter-skelter round of the Munster hurling championship, giving both counties something to fight for, even if for Tipperary that comes down to their last game against Clare next Sunday.

In the final act of madness, Forde manufactured a free of his own in the fourth and final minute of injury time, to strike the equaliser. Waterford it seemed didn’t know whether to laugh or cry. Nor it seemed did Tipperary manager Michael Ryan.

Ryan didn’t want to single out the contentious goal (and in truth neither would Waterford manager Derek McGrath): “I couldn’t comment on that and that’s just being honest with you,” said Ryan. “Just sheer elation that it [the goal] came. It was a terrible goal to give away, but we gave away a couple of terrible ones that were totally uncharacteristic of that back line. That’s the game and that game out there had everything. To serve up that kind of game, I’m really, really proud of our fellas. Look, we’ve given ourselves a glimpse of a lifeline and that’s enough to bring us to training next week, and we’ll go as hard as we possibly can.”

McGrath’s sentiments exactly: both teams came in hungry like the wolf - Tipp with just a single point from their two games, Waterford properly wounded after their opening less to Clare. Only days after reading their own epitaph, they too have breathed a little life back into their campaign, even if at one late stage they looked like delivering a knock-out victory over Tipp.

“We don’t want any discussion about referee’s decisions,” said McGrath. “We just move on. The decision or otherwise in terms of the goal may only tally if you don’t qualify from the group - it may become a point of conjecture as the summer goes on. You might feel a little bit more aggrieved about it. We’re just determined to move on to the challenge next Sunday. It makes it interesting going to Limerick. The points could be important yet - that’s the message in our dressing room.”

Played before a thoroughly engaged crowd of 10,237 in Limerick (the ‘home’ venue for Waterford, Walsh Park not yet suitable attired), Tipperary were down to 14-men for the second half, corner back Michael Cahill booked for the second time for a hit on DJ Foran, who was just pulling the trigger on the last point of the half.

After pushing their advantage out to 11 points in the 54th minute of the second half, 2-20 to 0-15, Waterford slowly then surely began to crack. First to take advantage was Patrick ‘Bonner’ Maher, striking a goal on 58 minutes, after Michael ‘Brick’ Walsh made a rare fumble. Still, Waterford were 2-20 to 1-17 to the good.

Waterford had hard-earned that advantage too: without room for compromise, they went man-on-man, abandoning their sweeper and going three men up front - and they started like a landslide. Two first half goals helped give them a cushion for that opening period, although Tipperary were at least partly to blame.

After an opening flurry of points from Tom Devine, Jamie Barron and Pauric Mahony - balanced by opening frees from Jason Forde - Waterford hit the net first: Austin Gleeson’s long ball fell straight into the Tipp goalmouth, and Devine swept in into net. At 1-6 to 0-3, a head start of sorts.

Further points from Mahony and Patrick Curran kept their edge, before Tipperary found some rhythm, excellent points from Noel McGrath and Ronan Maher slowly reducing the gap right back to one, 1-9 to 0-11.

Then came Waterford’s second goal - this one half-gifted by Padraic Maher, who batted down a long-range strike by Waterford goalkeeper Stephen O’Keeffe, only for Pauric Mahony to quickly collect and slam it back into the net. Still time for Foran’s second point, and Cahill’s sending off, in an eventful first half, Waterford in gentle control, 2-12 to 0-12.

Waterford started without the injured Tadhg de Burca, Barry Coughlan, Darragh Fives and Maurice Shanahan, and the suspended Kevin Moran, meaning manager McGrath had one finger on the panic button coming into this match. For now he’ll be keeping it there.