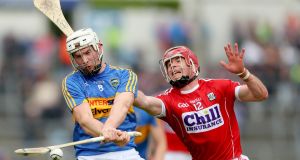 On an afternoon when the provincial championships rocked and rolled across the country, it was the oldest of old firms who gave us the first hint of a summer classic.

Tipperary and Cork played out a 2-20 to 1-23 draw in Thurles that left GAA writers everywhere fighting with every fibre to avoid cliché. The furthest we’re prepared to go is to say this – Cork were brilliant for the first 35 minutes, Tipp were sparkling in the second 35. Put whatever phrasing on it that least offends you.

An injury-time point whipped by substitute Jake Morris meant Tipp left Semple Stadium with their first point of the Munster round-robin. This was not a scenario you’d have had many takers for among the 22,456 who were whispering among themselves at the break after what must count as one of the most feeble halves of championship hurling they’ve put in for years.

Not alone were they nine points down, they were lucky it wasn’t at least half that again. As Mick Ryan conceded afterwards, there was more than just stern talking to be done at the break.

“Some of it isn’t printable,” he said. “But, look, what do you ever say? You’re appealing to the character that’s in them. The majority of that team that we’ve been supporting for 10 odd years, they’re made of way better stuff than that. And we have a great mix of young fellas coming into the squad too.

“To be honest, I just thought that second half effort was a total team effort. Loads of mistakes made but the positives outweighed them to get back in the mix. And look, we’re the ones who salvaged a draw. It feels like a win almost. But it’s not, it’s a draw. We have to be very real about this – there’s a lot of hurling to be played. But we’re still alive.”

The shared points mean that Cork sit on top of the Munster table, one ahead of Limerick who visit Páirc Uí Chaoimh on Saturday night. John Meyler’s side will have had a quiet bus on the way back south because this was a game in which they never trailed and in which Tipp were only level for a six minutes of the 75.

If Tipperary kick on from here to be a factor later on, Cork only have themselves to blame.

In the other Munster championship game, Clare put up a monumental total to inflict defeat on Waterford by 2-27 to 2-18 in Ennis.

The afternoon was disastrous from beginning to end for Waterford, who lost Kevin Moran to a straight red card and Noel Connors, Tadhg De Búrca, Barry Coughlan and Darragh Fives to injury.

They have to face a resurgent Tipp in Limerick next weekend, with the very real prospect of following last year’s All-Ireland final appearance with a summer that ends before it begins.

In Leinster, Galway kept trucking, this time with an altogether straightforward 1-21 to 2-12 win over a Kilkenny team who only scored 1-2 from play all afternoon.

Joe Canning nailed a penalty in among his 1-12 total and Conor Cooney landed four points from play at full-forward as the All-Ireland champions continued to look like the front-runners for Liam MacCarthy.

The football stories of the day came in Leinster where Carlow and Longford posted long-awaited wins over Kildare and Meath. Carlow were 2-14 to 1-10 winners over last year’s Leinster runners-up, while Longford had a 0-16 to 0-14 scoreline to celebrate against Meath.

Dublin had their first outing of the summer as well, running up a 4-25 to 1-11 win over Wicklow.

“There’s messages coming to me from America, Australia... all over the world and for Carlow people, it’s captured their imagination how this team is playing, how they’re going.

“It’s just a fantastic time for Carlow. We’ve real quality in our team. We really feel players should enjoy these occasions and that’s what we’re doing. It was a great challenge for us today and we rose to the challenge. It’s a great scalp for us to take. We’ll see where it takes us.”

For the teams left behind, the first round of the qualifiers will be drawn on Monday at 8.30am on Morning Ireland, with the draw also broadcast live on the gaa.ie website.

With the likes of Mayo, Tyrone, Armagh, Kildare, Meath and Tipperary all in the pot, it has the look of the deepest first-round qualifier draw in years.