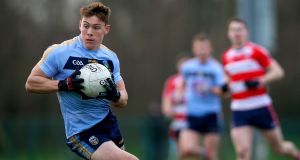 It’s now all of 16 year ago that Armagh and Tyrone contested the first All-Ireland football final between counties from the same province. In the lead-up to the matc, a sidebar story surfaced. The Queen’s University football club drew attention to the fact that 13 of the players involved on the big day on either side were all graduates.

A week away from another potentially historic final, UCD can boast a similar total of 13 but they’re all on the Dublin panel. They can go one better than Queens because Jack Barry, a possible starter for Kerry, also played for the college in the Sigerson Cup wins of 2016 and 2018.

The Dublin representation is huge in a city that also boasts two other Sigerson Cup winning colleges this decade, DCU and DIT.

According to UCD director of sport Brian Mullins, a central personality in the rise of Dublin football under Kevin Heffernan in the 1970s, there is a slightly random nature to it all.

“There’s a little bit of good luck that you get a cohort born together under the one moon so to speak, and at UCD we got that with Brian Fenton, Jack McCaffrey and Paul Mannion.

“Then Mick Fitzsimons came back to college. He qualified first of all as a physiotherapist and returned to do graduate medicine, which was a very brave decision for him to head into another four- or five-year studying programme after completing a top quality physiotherapy degree.

“Their effort is now manifesting itself in their exploits for Dublin. You get bumper crops, if that’s the right word, of individuals, and the fruits of that are now being seen in the county set-up.”

If the clubs produce the players, Mullins is also keen to acknowledge the contribution of two county managers in an era where co-operation between college and county isn’t always optimal.

“I have to say that a key ingredient is the good will and support of the county manager. The two managers, who give most support to UCD around Sigerson and Fitzgibbon time are Jim Gavin and Brian Cody. I don’t think it’s a coincidence that they’re the most successful managers in their codes.

“When Brian Fenton, Paul Mannion and Jack were considering whether to give the commitment we were looking for to Sigerson the person who encouraged and accommodated them was Jim Gavin.”

Five of the players were on the winning 2016 Sigerson team, captained by Jack McCaffrey, which bridged a gap of 21 years back to the college’s previous victory in 1995, a side which featured current coach and Galway All-Ireland winner John Divilly.

Two more, Con O’Callaghan and Eoin Murchan, were present for the successful 2018 campaign – curiously none of the Dublin players appeared on both teams – and the balance are either old-timers, whose day was done before 2016 or in the case of Cian O’Connor and Darren Gavin, current players and Dublin under-20 centrefielder Peadar Ó Cofaigh Byrne, who was still a Fresher this academic year, a rising generation.

Although Dublin have reaped a good harvest from UCD in recent years, they are not the only ones, according the long-serving UCD selector Tim Healy.

“By my reckoning we have had players on over half the 32 county teams in the past two years, so it is not all about Dublin even though it might look like it next Sunday.”

On the subject of the controversial funding Dublin receive from the GAA, Mullins believes that it is proportionate to population, and doesn’t see it is a major influence on the quality of players coming through to third level.

Yet he acknowledges that UCD have benefited from the “huge efforts at under-age level” being put in by clubs in the county.

“There may be a dividend coming through in Dublin with all of the investment in GDOs and when you add in the development squads – which I’m dubious enough about; we in Vincent’s haven’t won a minor championship in over 20 years and yet we’re the strongest team over the last six or seven years in county championship 1.”

He defends the modern third-level competitions against charges that they are now too rushed and compromised by the intrusion of intercounty commitments, and as a result have lost the free-wheeling sociability that created so much of their appeal to previous generations of players.

“There’s a lot of romance about when fellas were in college and out every night drinking pints. The world has changed. A lot of my job is involved with mental wellbeing, dealing with anxiety, pressure and stress; chats about the preparedness of current students coming up to college for life in general.

“There’s no comparison between now and 30 or 40 years ago when it comes to Sigerson and other competitions. The great thing is that they still exist and 100-plus years later they’re still going strong.”