If Sunday Game punditry wasn’t bad enough, the GAA’s disciplinary committees have also got in on the act 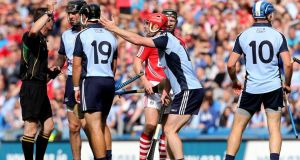 Referee James Owens issues Dublin’s Ryan O’Dwyer with a red card after he was given a second yellow. Photo: James Crombie/Inpho

It’s just over three-and-a-half years since the GAA rolled out details of the ‘Respect’ initiative, described by then president Christy Cooney as “the most important launch” of his term of office.

It has become familiar in the interim through the slogan: ‘Give Respect, Get Respect’. Intended to cover all sorts of relationships within Gaelic games, between players, spectators, team officials and of course, referees, it’s a positive attempt to cultivate civil behaviour by encouraging and inculcating it from the youngest age groups.

Naturally enough, the GAA being what it is, many have focused on the ‘get respect’ part of the equation at the expense of the part about giving. But given the competitiveness at the heart of the games’ culture and the at times deranged partisanship that surrounds matches that will hardly have caused too much surprise to the authorities.

The furore ignited by Joe Brolly’s denunciation of cynical play in football drove into the open the telling admission on the part of nearly all players who expressed a view that they regarded the rules as optional – as long as they and their teams weren’t too adversely affected by the deliberate breach.

In the friction between top players and those who coach children as well as administrators it was possible to lose sight of an truth at the heart of the controversy – that football through its punditry and internal discourse has become so much more rigorous in its reflections on indiscipline than has hurling.

Next year
The disciplinary reforms to be introduced in football next year depended for their existence on a strict demarcation that made it clear they would have nothing to do with hurling; otherwise some of the bigger hurling counties would certainly have shot them down.

Yet hurling is the game in which foul play is more likely to go unpunished. Unlike in football, there are few internal critics of this. Pundits are far more likely to applaud the ignoring of fouls, or in the words of the prevailing euphemism, “letting the game flow”.

There have been three contentious red cards issued by referees in Cork’s last three matches. The first two, for Patrick Horgan and Henry Shefflin, have already been rescinded and there will be agitation to have Ryan O’Dwyer’s expunged.

All three were valid from the referees’ point of view but the Central Hearings Committee have already overruled both James McGrath’s and Barry Kelly’s decisions. There’s no need to retread the path of those red cards but they were comfortably on the spectrum of what a referee is empowered to do in the face of “striking with a hurley with minimal force” and “careless use of the hurley”.

A referee’s report is regarded as overwhelmingly authoritative within the GAA unless video evidence can prove it mistaken – which in neither of the above incidents it did. The burden of proving such decisions as incorrect shouldn’t be as frivolously discharged as happened here.

Another issue which has previously arisen is the attitude to discipline and referees of some of RTÉ’s Sunday Game hurling analysts. “You can’t have the same rules for football as hurling. They were innocuous fouls,” said former Galway manager Cyril Farrell speaking about a couple of double yellows in the minor semi-final. “If you’re going to give yellow cards for a trip in hurling or if you’re going to give yellow cards like Henry Shefflin got for a little tip of the hurl across the hand . . ..”

Farrell is mentioned advisedly, as he was the only panellist to stand up for some sanity in the half-time discussion of last year’s nasty All-Ireland semi-final between Tipperary and Kilkenny. But his criticism of referees sets impossible objectives: obey the rules sometimes and disregard them on other occasions.

Sent off
“You had the chief of referees McEnaney saying last year, ‘five more players should have been sent off in hurling’. That’s crazy! If you’re going to overrun the game, we’ll have no game of hurling at all.”

“They’re saying it’s for the good of the game. It’s not. Hurling as we know is a physical game. It’s played with a hurl. There are times when you get a belt of a hurl and it’s not a free at all. The way we’ve got the refereeing now we’ll have so many yellow cards, you’re bound to get double yellows.”

He was speaking before the Dublin-Cork match but neither he nor Loughnane commented at half-time on Ryan O’Dwyer’s first yellow card. Again this was a perfectly plausible call by referee James Owens. Co-commentator Michael Duignan said it had been a “late tackle and definite free” but “a harsh yellow card”. In other words it was valid if severe. O’Dwyer’s second yellow was widely accepted.

The Wexford referee was praised for letting the game flow even though his failure to red-card Liam Rushe for a clear striking offence was seen as incorrect and perhaps motivated by leniency towards Dublin. This missed a couple of points.

One was that in his free-flowing administration, Owens was playing too many meaningless advantages in which no foul was awarded but equally, little benefit was likely to accrue to the aggrieved player.

Secondly this was a fabulous hurling match and the principal reason for that was that both sides played with both abandon and good faith so there weren’t going to be too many drawbacks to letting play go. Yet that’s not always the case and anyway, no matter how admirable a match and its spirit it doesn’t guarantee that a red-card offence won’t occur.

How are referees to get everyone else to ‘give respect’ when the committees in charge don’t and RTÉ’s senior pundits advocate dereliction of their primary duty – the upholding of the rules?
smoran@irishtimes.com

Stephen Kenny: Ireland reaching the Euros would be ‘extraordinary’ 15:33
Ben Youngs pens a new deal with Leicester 12:05
Solskjær says United’s unbeaten run is ‘nowhere near’ enough 11:53
Eric Dier given four-game ban for confronting fan in the stands 10:59
A glimpse of rugby’s future; assessing Herbert Chapman’s impact on soccer 07:15
Crossword Get access to over 6,000 interactive crosswords