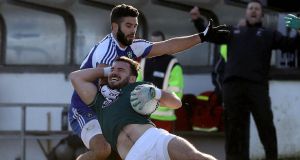 Kildare’s Fergal Conway is fouled by Neil McAdam of Monaghan during the Allianz Football League Division One match in Newbridge. Photograph: Lorraine O’Sullivan/Inpho

After both teams lost their opening round the previous week, they both came into the game determined to avoid a second consecutive defeat and that desperation for victory led to an enthralling game.

Monaghan were sharper around the field during the opening half and deservedly led at the break. They were ahead 0-3 to 0-1 after 13 minutes before Kildare came into things and scored three in a row to lead 0-4 to 0-3.

The scores were tied at 0-5 each when McCarthy rounded Kildare goalkeeper Mark Donnellan to score the only goal of the game and Dessie Ward added a point to leave them 1-6 to 0-5 in front as the teams headed for the dressingrooms.

Whatever was said once Kildare were inside had the desired effect because they were much improved in the second half. Ben McCormack (two) and Kevin Feely scored within two minutes of the restart as Kildare brought a new level of intensity to their game.

Having lost Paul Cribbin to a needless black card late in the first half, Kildare were dealt another blow when they lost McCormack from their attack in the 50th minute due to a tackle from Darren Hughes. Feely converted the resulting free from the 45 to tie up the scores but McCormack was having a fine game and was sorely missed.

At the other end, the sight of Conor McManus back on the pitch brought huge cheers from the sizeable travelling Monaghan support. He was immediately into the action and converted a 55th-minute free that he had won himself to put Monaghan two clear. However, the home side came back again and substitutes Paddy Brophy and Niall Kelly struck to get them back on parity by the 63rd minute.

McCarthy’s close-range free put Monaghan ahead once again but with five minutes added on there was still plenty of football to be played. Kildare pushed hard for an equalising score, Brophy hit the post, Eamonn Callaghan dropped a shot short from a good position and Feely shot wide from the 45.

Cian O’Neill’s side couldn’t find that crucial point though and after losing by a point to Mayo last week, Monaghan held on to win by the slenderest of margins.

Mayo GAA cut contact with Tim O’Leary after ‘Horan Out’ tweet 07:22
‘I want that gold medal’: Rhys McClenaghan talks Tokyo Olympic aspirations 07:02
Five Golf Classics for you to tee up at in 2020 06:00
Out of the shadows: Floodlights a priority for clubs across Ireland 06:00
AFL’s equalisation policies a possible guide for the GAA 06:00
Crossword Get access to over 6,000 interactive crosswords