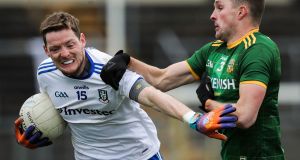 Monaghan’s Conor McManus will be key if they are to beat Cavan on Saturday. Photo: Inpho

These sides might not be too far apart. Not alone did Cavan win last year’s encounter but it would have taken very little for Monaghan to be relegated last week and for Cavan to stay in Division Two, meaning they’d both be starting off on the same footing next year (or whenever). Cavan have been playing reasonably expansive stuff under Mickey Graham but their youthful attack is probably the main difference between the sides - they have nobody to match what Conor McManus can be relied upon to score.

It is a problem Monaghan are familiar with, since they too have nobody to match McManus. They have newish blood in attack in Micheál Bannigan, Stephen O’Hanlon, David Garland and Andrew Woods but they are a rotating supporting cast. If one of them explode here, Monaghan might stretch their legs and see it out comfortably. Far more likely is a tight, knotty affair where the home side’s free-taking makes the difference.

Between the many jigs and innumerable reels, Limerick have had a decent year. They won the McGrath Cup back in January and have been promoted from Division Four a year after finishing 31st out of the 32 teams. Ian Corbett and Hugh Bourke have led the charge for them and they should have more than enough for a Waterford outfit that was let down by its county board’s attempts to pull out of the Antrim match.

One of these teams will presumably be in a Munster final so whoever loses here will spend the winter regretting it. Weirdly, this is their first championship meeting since 2002. Tipp have generally held the whip hand in the league but Clare won their last encounter and are a settled Division Two team. Both got star players back over the break - the suspicion here is that conditions in Thurles are likely to make it more a Gary Brennan day than one to suit Michael Quinlivan.

This fixture is the reason why Leitrim’s season hung on last week’s league meeting with Tipperary, which was a one-shot opportunity to preserve the county’s place in Division Three. It didn’t work out, leaving just this sudden-death afternoon as all that remains of their year. Ryan O’Rourke is out, making the whole enterprise even more improbable. Mayo also had relegation disappointment losing their decades-long tenure in Division One but there was enough in the performances to promise a decent championship.

There wasn’t much in it when the teams met on the opening day of the league but as things unfolded, Longford contested promotion from Division Three whereas Louth slumped to what appeared likely to be a white-washed season until a dead rubber against already promoted Down took the bare look off things. Louth are talking about a total reset from next season whereas Longford risked opprobrium for handing out a walkover in their last league match. The focus on this may pay off.

The return of Paul Broderick and the new name above the door in Carlow makes this a more compelling affair than it might have been. Niall Carew took an unfancied Sligo to the last 12 in his first year and it’s not inconceivable that Carlow could catch Offaly on the hop here. John Maughan’s side lost the last three games of the league and though they historically have always dealt with Carlow without much fuss, this is no gimme. The loss of the two Murphys might swing it though.

Wexford have lost their Leinster championship opener to five different counties in each of the past five years. Wicklow would make it six from six. Davy Burke has done a phenomenal job with Wicklow and, in beating Wexford last weekend, they won what is probably the more important fixture between these two. For Shane Roche, Wexford’s defeat was a bit of a disaster. This is a chance to make something of a hotch-potch year.

Such a killer fixture. By dinner time on Saturday, either Michael Murphy or Conor McKenna will be out of the championship. That McKenna leaps to the top of the bill when you think about Tyrone now just goes to show his impact in the two games so far. It’s not that he gives Tyrone a different dimension, he makes them a different kind of team altogether. They move the ball faster and longer and earlier with him around.

Question is, do they go with that approach here or will the memory of how Donegal schooled them last year be too fresh in the mind? All the talk before that game was of a new-era shootout between two teams who finally wanted to play ball. Donegal pulled the old switcheroo and went with a full-on blanket and Tyrone looked pretty naïve in defeat.

In that light – and given the consequences for defeat – this will surely be a cagey, old-style dogfight. Donegal get the nod but not with any great confidence.

Derry could have done with the qualifiers this year. Rory Gallagher has put a bit of steel into them and when you add the return of Conor Glass to the consistent availability of the Slaughtneil contingent, they look like a team going places. Sadly for them, so do Armagh. Only Colm Collins and Mickey Harte have been in the job longer than Kieran McGeeney and with genuine options in midfield and attack, they are liable to run up a score.