Antrim waiting on venue confirmation for second round qualifier 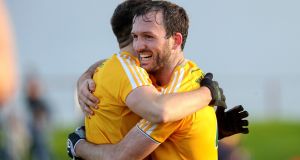 Seven of the eight All-Ireland football second round qualifiers will take place on Saturday week, with just one on the Sunday.

The Munster football final is also taking place on the Saturday, while the Ulster and Leinster finals will be on the following day.

Sunday’s sole encounter will see Offaly take on Sligo - the Faithful county are hoping to build on their promising showing against Meath and their win over London, while Sligo are the only team of the 16 in qualifier action who have yet to win a match this summer.

The Antrim footballers - who have had their own Casement Park closed since 2013 - will have to wait on a venue inspection and safety certification to see if they can play their home match against Kildare in Belfast. The match has been scheduled for Corrigan Park - home to the St John’s club - and the venue has a capacity of around 2,600 people.

Antrim’s home Ulster quarter-final against Tyrone was played in Armagh’s Athletic Grounds with Mickey Harte’s side winning comfortably. Antrim bounced back with a surprise win over Louth last weekend.

The Munster final throws in at 7pm and will be live on RTÉ, the same time as Monaghan v Armagh and Down v Mayo, one of which is likely to fill Sky Sports’ Saturday night slot.