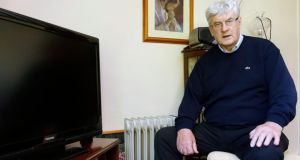 Fr Harry Bohan: “When I hear what goes into preparing a Clare team now, I find it mind-boggling.” Photograph: Don Moloney/Press 22

Fr Harry Bohan, parish priest in Sixmilebridge, Co Clare, which he calls “the home of hurling”, was involved with various senior hurling teams in the county from the 1970s on, as manager and selector.

This year, however, he is watching the season as a fan, a role that has taken a little getting used to. “I was involved for a long time but I suppose I am a spectator now. It took me years to get it out of my blood and to let go. When I hear what goes into preparing a Clare team now, I find it mind-boggling.”

Fr Bohan (75) says true Clare hurling fans know this is one of the most skilled teams to come out of the county.

He sat around a table recently for a chat with Jackie O’Gorman, Seanie McMahon and Cyril Lyons, and they traced the evolution of Clare hurling from the 1970s. They agreed the current Clare team has taken time to gel with some supporters, and it took a while to appreciate the system the management is imposing on the team. There’s a unity there now that wasn’t always present in the past, he says.

“When I became manager in the 1970s, club hurling was much stronger than the county team. So the first thing I had to do was get rid of the club loyalties inside the county dressing room.”

Due to recent surgery for treatment of cancer he will not be at the game on Sunday and it is the first championship fixture he will miss in decades.

During his illness the local community helped, with the likes of Anthony Daly and Davy Fitzgerald visiting regularly.