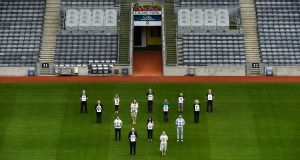 The GAA HQ team remember the 14 victims who lost their lives in the Bloody Sunday tragedy 100 years on at the launch of the GAA Museum’s Bloody Sunday centenary events series at Croke Park. Photograph Harry Murphy/Sportsfile

This year’s GAA Museum summer school heard on Friday in Croke Park that the hard part of the current wave of centenaries is still to come with the 100th anniversary of the Civil War less than two years away.

The theme of the school was ‘Sport, Peace and Reconciliation’ and in his address Dr Richard McElligott of Dundalk IT suggested that the Civil War commemorations should be based in his own county of Kerry – just as the 2016 centenary of the Easter Rising centred on Dublin – and should feature the county team that won four-in-a-row All-Irelands from 1929 to ‘32.

As publicised earlier this week, the event marked the beginning of the GAA Museum’s most significant project, the centenary commemoration of Bloody Sunday, which falls next November but which includes a whole programme of lectures and exhibitions.

In the course of ‘Atrocity and Atonement: The Civil War and the Rise of Kerry’s Greatest Team,’ Dr McElligott – one of the GAA’s foremost historians and author of Forging a Kingdom: The GAA in Kerry 1884-1934 – built a compelling case for the proposition.

He remained at pains to emphasise that commemoration was not the same as celebration and that, unlike other centenaries in recent years, there would be nothing to celebrate in marking the Civil War but that it needed to be remembered.

The Kerry football team of the era is he believes an ideal prism for viewing the awful conflict through the experiences of the GAA in the county, which provided a redemptive – if imperfect – template for reconciliation.

Illustrating starkly the depth of the bitterness caused by the Civil War in Kerry, where the conflict raged more intensely and at greater length than anywhere else, he referenced the Ballyseedy massacre on March 7th 1923 which involved nine republican prisoners being taken from Tralee jail, tied together and blown up by a landmine in reprisal for the deaths of Free State soldiers the previous day.

The intention had been to pretend the prisoners had been clearing a road block when accidentally killed by the mine. One unobserved survivor, Stephen Fuller who had been blown into an adjoining field, managed to escape and so the truth, like him, survived.

Recalling contemporary accounts that “birds were eating the flesh off the trees around Ballyseedy for days afterwards,” McElligott added that such was the mutilation of the dead that it wasn’t apparent to the Free State soldiers that they were removing the remains of eight and not nine bodies.

General Paddy Daly, whose Dublin brigade were sent to Kerry to confront the insurgency, commented on the reprisals: “Nobody asked me to take my kid gloves to Kerry and I didn’t bring them.”

By the end of the war, the best Kerry footballers were in internment camps but through the agency of three remarkable footballers, John Joe Sheehy, active in the IRA, Con Brosnan, a Free State army officer and Joe Barrett, another republican, the county team was put back together again.

Brosnan allowed Sheehy, who was on the run at the time, safe passage to play for the county in a Munster semi-final after which he was allowed to melt into the crowd and escape.

By the end of the decade Barrett, whose son JJ wrote a terrific memoir – In the Name of the Game – about the period, gave up his right to captain Kerry in 1931 so that his political rival Brosnan could lead the team to what was a three-in-a-row.

Barrett did get to captain the four-in-a-row side the following year. According to McElligott, “the symbolism of what Joe Barrett did cannot be overstated”. He isn’t though afraid to acknowledge that this wasn’t a case of ‘happy ever after’ and with the rise of dissident republicanism after the Civil War, the old divisions remained.

For example, Kerry’s fund-raising tours of North America were also fronts for similar activities on behalf of republicans – as well as gun running – and before one of them Sheehy had proposed the IRA should issue death threats to Brosnan to discourage him from travelling lest he get wind of what was happening.

Still, the GAA in Kerry survived and prospered and in the exploits of that four-in-a-row team, McElligott identifies: “atonement for what Kerry had suffered”.

There were also interesting presentations on the role of sport in reconciliation in Northern Ireland from Armagh All-Ireland winner, Ulster GAA’s Diarmuid Marsden, and Gareth Harper of the Northern Ireland branch of the international PeacePlayers initiative.s

Proceedings wound up with some fascinating insights into the peace process and Belfast Agreement talks in Stormont from former diplomat Ray Bassett.

The GAA Museum summer school, ‘Sport, Peace and Reconciliation’ will be available on the museum’s website, crokepark.ie/gaamuseum, later next week.