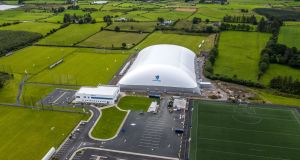 Back in July five Slovenian workers arrived in Mayo, isolated at a house in Kiltimagh before commencing work just over the road on a site outside Knock.

A month later, having completed their work at the Connacht GAA Centre of Excellence, they left behind 100 tonnes of material, erected into a structure 15,000m2 in size, dominating the landscape along the Mayo/Roscommon border like a scene straight from the pages of an Isaac Asimov novel.

“The opportunities are limitless,” says Connacht GAA secretary John Prenty from the middle of the field in what is now the world’s largest sports air dome. And indeed, they are.

Though an indoor playing facility of some description was in the long-term plans when the sod was first turned at the facility in 2010, it wasn’t until 2017 when the right path became clear, hastened by the surprise visit of Enda Kenny during his time in office.

The dome is one of the largest indoor venues in the country. It could host concerts, conferences, trade exhibitions and more

Calling in for an unannounced look around, it was the then Taoiseach who first suggested installing an air dome, similar to the one used by his local tennis club in Castlebar. That was the Eureka moment. And before long, Prenty and Roscommon footballer Cathal Cregg, the provincial games manager based at the centre, were jet-setting to Finland. Putting plans in motion by learning from a country setting the standard for air-supported structures. It was the first step of a lengthy process of discovery.

Sold on the idea from their travels, which also included a trip to Queens Park Rangers in London, they began funding the €3.1 million required, €2.1 million deriving from the Rural Regeneration and Development Fund, €700,000 from Croke Park funds and €300,000 from money left aside by Connacht GAA with the project in mind.

Slovenia-based DBS Engineering, tasked with constructing the actual structure, sent five employees, to be aided by a few local hands, and their work was completed within a month of arriving into the county in the midst of a global pandemic.

After all the waiting, the work was done in less than the time it takes to complete a provincial championship. In saying that, however, groundwork had previously been carried out by Prunty Contracts of Fermanagh and Tobin Engineers in Galway, while SIS had already laid down the AstroTurf pitch.

The completed project is wholly impressive: a facility 26 metres in height (twice the height of standard uprights) at its highest point, 150m in length and 100m wide, boasting a 30m running track on one side of the pitch with a capacity to insert seating for 600 people on the opposite side, lights and cameras and speakers are suspended against the structure right the way around.

A well-equipped monolith in the heart of rural Ireland. The specifications alone scream value for money, which hasn’t always been a given with GAA circles - the spiralling costs of Páirc Uí Chaoimh are just a recent case in point though an array of other projects could be named as examples.

“We’ve had 1,500 games over the past 12 months,” says Prenty, arguing the case for the air dome’s development. “This year alone we’ve had championship matches from Sligo and from Galway.

“There was about 200 events that we couldn’t run here because of the weather. This is now open to all counties and gives an experience that isn’t available anywhere else. To us, this is a game changer because it gives us an opportunity to play 24/7, 365 days a year.

“We’ve already had several counties enquiring about coming in here. Counties with their own centres of excellence aren’t able to meet their own needs with them. They will probably have to examine their conscience to see what they all need when you have additional things here. You still won’t be able to train 24/7 in any of the other centres.”

But playing opportunities are only the shallow bay waters in an ocean of opportunity in Bekan. With an ability to host 10,000 people in a concert setting, the dome is one of the largest indoor venues in the country. It could host concerts, conferences, trade exhibitions and more.

If needed, the state-of-the-art lighting system can be set to flicker in a concert setting with the in-built sound system yet another enhancement that is sure to attract the attention of promoters.

But it will be first and foremost a GAA facility that can pay for itself in the short- and long-term. While it’s not unduly expensive, costing approximately €100-a-day to run, Prenty is keen to ensure it doesn’t drain money that’s needed in other areas at grassroots level. To ensure this can be achieved, sponsorship hoardings will be hung from hooks in the structure a few feet from the ground, rather than along the sidelines, stretching the entire way around the arena. But, as was the case with the original plan, Prenty is loathe not to aim for bigger and better.

“We’re talking to two or three companies, one of them an international, at the minute about naming rights,” he says. “There’s a lot of irons in the fire. This is going to be paid for 100 per cent in three weeks’ time and it will last for 40 years.

“But we want to be able to futureproof it, rather than putting our own resources into it all the time.

“We’d have no problems with FBD leagues, Under-20 championships, minor championships, any kind of a school game, club championship - all those things. Intercounty championship games involving Mayo would obviously involve too many people but that might change in the future.

“There has been a huge amount of interest over the last few weeks. And a lot of people are just waiting around to see what the finished article will be like. The photographs don’t show the full picture of the expanse of what’s inside.

“You can’t turn your back and there’s people in to see it. There was people from Cork, Derry and Donegal that I saw today.”

An official opening must be put on hold for now but, for all the talk of bold ambitions, Prenty has his own humble plans to mark the event - whenever that time may come.

A Connacht XV versus the All-Ireland champions, or some intercounty blockbuster with admission as in-demand as a sixth Gareth Brooks gig, may feel like an appropriate setting for the launch party. And that may still happen.

But if Prenty gets his way, he would have “hundreds of children running around”, a blitz or training session of some sort, to mark the development’s first major event in symbolic style.

Because at its heart, it’s a venue for all where opportunities ahead are indeed limitless.

💡 Great to have the lighting system installed in the Air Dome!