Former GAA president had his own personal battle with the coronavirus 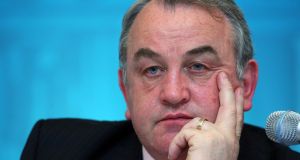 Nickey Brennan: “If there’s going to be no change next year – no vaccine or treatment – are counties going to incur the cost of the county game?” Photograph: Dan Sheridan/inpho

For former GAA president Nickey Brennan, discussing the consequences of the coronavirus pandemic for Gaelic games is personal as well organisational. The Kilkenny All-Ireland winner is recovering from a dose of Covid-19, picked up last April and which flattened him for nearly a fortnight.

“I feel good and came out of it well,” he says, “apart from a cough now and then. I did a lot of walking and am back swimming four or five times a week. It was a big help with the breathing.”

He is concerned though that the GAA may be facing a longer-term recovery if current trends persist. There is already little enough confidence in circumstances holding sufficiently firm to allow the inter-county season to go ahead but Brennan is concerned that the biggest challenges won’t arise until next year.

“The biggest problem I see on the horizon isn’t so much this year. We know what will happen this year; there’ll be a championship or there won’t and there’ll either be supporters or there won’t. There’s a limited range of scenarios. But what’s going to happen next spring?

“If there’s going to be no change next year – no vaccine or treatment – are counties going to incur the cost of the county game? It’s impossible to say at this stage but it’s the biggest challenge – how long does this go on and how does the GAA survive if there’s no end in sight? We just don’t know.”

This year is about to enter a critical phase. It’s now less than a month before county panels will be permitted to resume training and the competitive season is scheduled to start on October 17th.

Already the difficulties are stacking up: the decision by NPHET [National Public Health Emergency Team] to advise against any increase in the permitted attendance at matches beyond 200; the knock-on impact on revenues for counties whose teams will start incurring costs and the ever-present spectre of further lockdowns to counter the pandemic spread.

Although he believes that the only likelihood of this year’s All-Irelands happening will be behind closed doors, Brennan’s main worries are centred on the prospects of 2021 providing no respite.

It’s all very well if this year’s ambitiously compressed programme can’t happen– it would in any event cost a lot more than it’s likely to be able to raise – but if the severe curtailment of revenue continues and next year’s leagues roll around, what then?

“Do we turn around and say to the GPA that we can’t afford player expenses? Other than the basics – travel and a meal after a game – we can’t provide the usual supports. This is radical thinking but it may be necessary. There are huge challenges for everyone.

“Around 550 people are employed all around the country aside from Croke Park. If you were to look at that payroll annualised, you’re probably talking north of €20 million. Income will be media or as much of it as can be brought in and the same with commercial or sponsorship.

“If all came to all the GAA could probably live with it for 2021 but it would mean radical change and people being let go and other deep cutbacks and it would take the GAA 10 years to fully recover from that unless there’s significant money coming from Government and public funds are going to be scarce.”

Already the question of Government support is a topic of conversation. The former president acknowledges the paradox of the GAA being probably the least compromised of the major field sports but also needing assistance if an inter-county championship is to take place.

“The irony is though that of the major sports the GAA is probably in the strongest position. Soccer is in turmoil and needs money simply to survive and professional rugby is also in serious circumstances. The GAA doesn’t have to pay players and has virtually no debt and in fact has some reserves.”

Yet individual units are strapped for cash. The Department of Sport’s announced funds of €40 million between Gaelic games, rugby and soccer have yet to be allocated but there is a growing feeling that if All-Irelands are to happen, they’ll need a separate source of funding.

It may appear uncomfortably close to the Roman concept of bread and circuses but the GAA believe that Government would like the public to have a comfortingly familiar attraction to raise spirits this winter. Brennan understands this point of view.

“If you take the last few weeks and the matches shown on TG4, RTÉ and all of the streaming services, it hasn’t been possible for that many to attend but being able to watch them has been hugely important from a mental and psychological point of view and has given people something to look forward to. It brings a sense of normality and takes people’s minds off the troubles that are out there.

“It’s understandable that the Government might want a championship, even a heavily modified one, and have the hype that goes with it, the media interest and broadcast coverage. It brings enjoyment, which is important when there’s so much gloom and doom around.”

In the immediate term he sees the successful reopening of schools and colleges as being key to whether the GAA can benefit from a few more concessions in terms of crowds and providing a fair wind for the championships.

“If you get a situation where schools and colleges open but cases develop and individual schools have to close down, it’s back to square one and where do you go from there?”

1 Gordon D’Arcy: the next fear for Irish rugby is England in Twickenham
2 Seán Moran: Fallout from Tyrone final celebrations will concern GAA
3 David Moyes discovered positive test an hour after arriving at London Stadium
4 Pro14 teams need private planes to keep show on the road
5 How Dundalk’s opponents Sheriff started on the wrong side of the law
Real news has value SUBSCRIBE