Golden gets chance to shine for Clare after injury frustration

Sixmilebridge man impresses at midfield in victory over Kilkenny 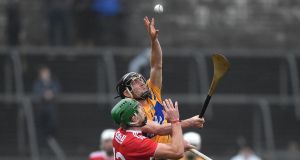 Shane Golden’s return to full fitness will add another dimension to Clare in the championship. Photograph: Tommy Grealy/Inpho

There were bright pockets all over the field for Clare in their narrow win against Kilkenny on Sunday but Gerry O’Connor was quick to identify the contribution of Shane Golden at midfield afterwards.

It may only be February but already, the Sixmilebridge man is enjoying what, by his standards, is an uninterrupted season.

He struck a point in either half for Clare in a performance defined by hard running and a combative, athletic midfield presence. The TG4 man-of-the-match went to the quicksilver Colm Galvin, who was a joy to watch, but Golden’s return to full fitness will add another dimension to Clare in the championship.

Patience has been Golden’s chief attribute in recent seasons. He is no stranger to the Clare panel, consistently named on squads over the last few seasons. But 2017 was effectively written off through prolonged hip and back injuries. He was able to line out for Sixmilebridge in the county final that October but the first five months of the 2018 intercounty season left him sidelined with injury again.

He was constantly playing catch up throughout a championship which Clare exited after a riveting semi-final replay defeat to Galway. It wasn’t hard for Clare supporters watching Golden in full flight against Kilkenny to imagine what he might have brought to those physically gruelling encounters last August.

“Ahh, definitely,” Golden says of the pleasure of just being on the field again. “Getting over the injury has been the toughest part of the last few years – more than twelve months. But I am just delighted to be out there. Fingers crossed I can stay fit and healthy. Obviously it is good to be playing well but the team is the big picture. If I can play well and the team wins, it’s to make an impact really.”

Clare bossed the aerial battle against Kilkenny and dominated the game but saw an eight-point second-half lead evaporate to the extent that the home support was relieved to hear the final whistle go in the 75th minute. Kevin Kelly had reduced the gap just a single point (2-20 to 1-22) with a goal from a free just before that. The conclusion left Clare with mixed feelings but it was a marked improvement on their subdued showing against Tipperary in the first round.

“We just really went out there looking to nail down the first 15 and 20 minutes and just really get stuck in and hit them hard, which we didn’t do last week,” Golden added.

“It was a real role reversal compared to what we did. So we were happy with some aspects. Obviously the scoreline in the end was a bit tight. But there were positives to take out of it. If you can’t go out and be aggressive at this time of year in these kind of games you are going to be struggling.”

It was a demanding match: heavy ground and the high intensity covering and tackling which Kilkenny bring to all games.

“First half, a lot of lads came off panting,” Golden acknowledges. “They were very tired at half-time. Kilkenny always bring that anytime you play them. You have to admire them all . . . I mean we’d have fierce admiration for the way they play and a lot of teams have tried to copy literally their aggression and intensity.”

The pleasing thing for Golden was that he was comfortably at the pitch of the game from the beginning. It has been a relatively promising start to the year for Clare: fizzing against Tipp in the Munster senior league final, then flat against the same opposition in their first national league match and terrific in patches against Kilkenny.

Golden has slipped into the mechanics of the team smoothly, contributing three points against Waterford in the Munster league semi-final, two in the final and another two from play on Sunday.

Sixmilebridge have used him as a target man full forward on occasion but with the attacking riches available to Clare, he is more likely to be seen at centre field this year. Clare have a fortnight now to prepare for Cork and high on their priority list will be a reduction in the foul count which gave Kilkenny’s sharpshooter Kelly the chance to fire 1-11 from placed balls.

“Maybe we didn’t realise we were only three or four up towards the end and I thought there were probably a few soft frees that brought them into it a little bit,” Golden says. “But we definitely have to learn that it isn’t over until it’s over and the whistle goes. Because it did only come down to a point in the end.”