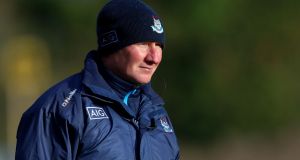 No wonder there’s still some confusion. By Jim Gavin’s own admission, Dublin aren’t practising or even talking about the new offensive mark, currently being trialled in the Allianz Football League.

Despite scoring two points via the mark in Saturday’s win over Galway at Croke Park – first from Niall Scully, then Cormac Costello – it also seems Gavin has no intention of practising ahead of this Saturday’s showdown against Kerry, already a 12,000 capacity sell-out at Austin Stack Park in Tralee.

Several issues surrounding the new rule were highlighted during the weekend’s second round of league games. Part of the confusion stems from exactly how the player must signal whether or not he is taking the mark; under the rule, the player must also kick that mark within 15 seconds, whereas in Costello’s instance, he took several seconds longer.

“No, we didn’t practise it at all, or talk about it either,” admitted Gavin. “The players, I think, are smart enough and technically skilled enough, that if there are opportunities, they’ll take them. But no, we’re not doing any work on it at the moment.”

Part of Gavin’s indifference stems from the fact the experimental rules won’t be applied for the championship, but will go before a later Congress if they are to be written into rule.

The rule also noted: “Up to 15 seconds shall be allowed for a free to be taken from a mark; a free-kick from a mark shall be taken from the hand(s) only. If a player opts to ‘play on’ when awarded a mark, he may be challenged i.e. provisions (b) (i) and (ii) of the current mark rule shall not apply during the experimentation.”

Only Kerry go into Saturday’s game unbeaten, recording an opening round win at home Tyrone, then a second round win away to Cavan on Sunday. Dublin lost their first game away to Monaghan, before bouncing back with an 11-point win over Galway in Croke Park on Saturday night.

“Whether we play Kerry in Killarney or Tralee, they’re great games,” said Gavin. “They’re a quality side and obviously they have had a new change of management team who are coming in with multiple All-Irelands at minor level. It’s a team of young stars and it has the makings of a great game. That will be our fourth week back. Again . . . as our pre-season work, we’re just really looking forward to a great game down in Tralee.”

Dublin beat Kerry in last year’s league, Kerry getting the upper hand in the 2017 league final, ending Dublin’s 36-game unbeaten run, while the sides drew in the round previous.