Fennelly eager for the chance to prove himself again

Substituted against Galway in the Leinster final, Kilkenny’s captain is on a mission 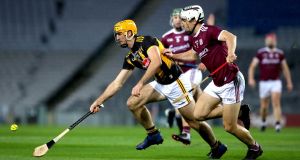 Colin Fennelly in action for Kilkenny during the Leinster final win over Galway. “Me walking off, if I looked disappointed, that’s because I was disappointed, I was gutted.” Photograph: Ryan Byrne/Inpho

Colin Fennelly has just been singing the praises of Richie Hogan when he’s asked about his own voice in the Kilkenny team.

He is remember team captain, among their most experienced forwards, considered to be “in-form” – only to find himself whipped off early in the second half of the Leinster final win over Galway.

Hogan had come in for Walter Walsh, scoring his wizardly 1-2 that turned the game in Kilkenny’s favour, shortly before Fennelly was replaced by Liam Blanchfield, both players then captured on TV sitting in the empty stand looking none too pleased about the matter.

Fennelly makes no apologies for his body-language, even if it garnered him some of the similar furore that befell Ireland rugby captain Johnny Sexton a couple of weeks before, after he’d been called ashore against France in the final game of the Six Nations.

All that matters for Fennelly is trying to win back his place for this Saturday’s All-Ireland semi-final against Waterford, inspired in no small part by Hogan’s own persistence and determination, not least given the way his 2019 All-Ireland final against Galway had ended – shortly before half-time –, with a straight red card.

“To have him there as an option, to come off the bench, is unbelievable,” says Fennelly.

“He changed the game against Galway, everybody saw that. It’s great to see that recognition because last year I thought he had a good year for Kilkenny and it was clouded by that final. I don’t think there was much in it, but it was just clouded by that. And for such a player.

“He’s outrageously skilful. The things you see him doing in training, you’d wonder how he’s not playing. But there are loads of lads in training and you’re wondering how he’s not playing, and that’s probably a good thing for Kilkenny that we have that at the moment. There is serious competition there for places.

“And a lot of players might have hung up the boots, at 32, 33 after something like that, and with all the injuries they had. It takes a lot of guts to come back and to be on the bench and come on and do what he does. This year, I’m not sure if the break did him good, but he’s in every session now and you can see that from the match the other day, any match he got near his movement was excellent. And the goal he created was unbelievable.”

Brian Cody is well used to starting and dropping players all over again based on training form alone, although the two-week break since that Leinster final doesn’t allow Fennelly or Walsh much time; either way, says the captain, any personal disappointment of him being replaced was promptly forgotten come the end result.

“I don’t think it’s something you are conscious of, playing in a Leinster final, you’re stuck in the moment,” he says of his Sexton-like demeanour. “Me walking off, if I looked disappointed, that’s because I was disappointed, I was gutted. I spoke to Lester after the game too, said you’re ‘not going to be happy’, so why have a smile on your face.

“Then afterwards I was delighted for the team, to get my hands on the cup, no matter how I played, it’s a team performance. It was hard to see us breaking through, until Richie got that goal, that just opened the whole thing up. A spark like that can change it, and it’s great for Brian to have those options.”

It was Kilkenny’s first Leinster title since 2016, and at one stage, trailing Galway by five points in the 55th minute, they appeared to be staring down one of the longest spells ever without a provincial title; Fennelly has also lost form before, for Kilkenny and Ballyhale, and has his own little tricks to work it back.

“It does get more difficult, sometimes. You talk to the management team, and usually the answer is always the same, you put the head down, focus on the basics of the game, work hard. You can’t do much more than that, do the simple things, and it will come round. And that’s what I’ve focused on over the years, if I’ve lost form over the years, you look back, and you might have to change things a small bit.

“The closer I am to goal is probably what I like about it. I think it was probably two, three years ago, I was out of form with Kilkenny, Henry [Shefflin] had taken over with Ballyhale at the time, he just spoke to me.Henry did a lot of work with me on that. Just give you small pointers throughout the year and I think that was a massive year.

“For every game, people out there might think, ‘oh yeah, he’ll start this weekend’. It’s never the case. Grand, if you think you played well but if you’re going bad in training, Brian always goes by training. He always says, ‘you’re as good as your last performance’. And the last performance is the last training session played.”