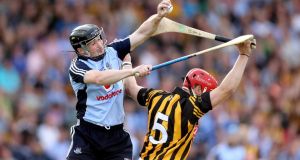 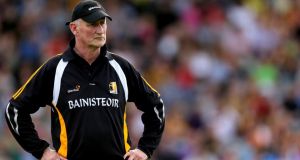 Dublin 1-16 Kilkenny 0-16: The end of a dynasty story can wait until next Saturday’s meeting with Tipperary, but Kilkenny lost to Dublin tonight in championship for the first time since 1942.

So often the hero in hurling can be found at centre back. Liam Rushe was the man charged with plucking bullets from the sky as Kilkenny hurlers, with a sack full of All-Ireland medals, attempted to decapitate him with their scimitars.

The combination of bravery and dexterity must be astonishing.

Rushe was just that tonight.

He tried to stop them but his people in the 10,532 crowd gave him a King’s Chair off the field after an epic display in the face of some ferocious, yet desperate, Kilkenny attacks down the home straight.

With Michael Carton, Stephen Hiney and Peter Kelly excelling either side and from behind, the 23=year-old has never been so dominant for Dublin.

And what a time to do it. Any debate about the number on his back can be permanently shelved.

“We haven’t beaten them in championship for 40 years or something so we are happy to break that duck,” said Rushe afterwards. “To come to the same venue where we were massacred by Kilkenny last year means there’s a bit of romance to it as well.

“It’s one of the first times O’Moore Park has heard ‘Come on you Boys in Blue’ I’d say. Hopefully they’ll turn out in numbers for the Leinster final now.”

One certainty is that Kilkenny’s monopoly of Leinster is over, having been comprehensively beaten by Galway in last’s year’s provincial final.

That’s who Dublin face next Sunday at Croke Park as Johnny McCaffrey strives to be the first Dubliner to get hold of the Bob O’Keeffe Cup since 1961.

“When I came up here first to win a Leinster championship was an absolute dream,” said Daly of his early days putting young, talented Dublin players through their paces in 2008. “The dream lives on I suppose. It’s been a great old championship to watch.”

It certainly has, what with Limerick putting Tipperary into the qualifiers and an unheralded Cork catching a fancied Clare.

But this Dublin victory was no fluke. It was a collection of hurlers with provincial medals at minor and under-21 combining with long serving men like David ‘Dotsy’ O’Callaghan, Conal Keaney and Stephen Hiney.

O’Callaghan was superb in the first half, putting Conor Fogarty through the horrors to gather four points from play.

He came in for Paul Ryan after just 18 minutes of last week’s drawn game and made it impossible for Daly to leave him off.

Several individuals in that 0-17 to 1-14 tie atoned for dodgy performances.

Fear is a marvellous motivator. So many of the anonymous Dublin and particularly Kilkenny hurlers from last Sunday’s draw were frightened into life.

Either end of the field, Rushe and Tommy Walsh made themselves known under the most testing of dropping balls.

For certain, Brian Cody wasn’t long wielding the sheppard’s hook. With Dublin galloping into a 0-7 to 0-4 lead after 20 minutes, Cillian Buckley was relieved of duty, understandably considering it was his third game in six days, with Michael Rice following him off soon after.

In came a very aggressive Lester Ryan, who ripped the helmet off Danny Sutcliffe for a yellow card while Colin Fennelly began his partial redemption for last week’s poor showing with a quick point.

It would have been a more convincing victory - Cody conceded that Kilkenny were out hurled for the second week running - only for the inaccuracy of Ryan’s second half strikes from the placed ball.

They really should have kicked on when Sutcliffe raised a green flag in the 53rd minute. The roving wing forward shot low with venom, having been first to Ryan’s spectacular clearance off the Kilkenny line after Mark Schutte had given O’Callaghan a sight of goal.

But Eoin Larkin frees kept them in touching distance and when referee Peter Kelly harshly adjudged that Rushe had fouled a marauding Richie Power, Larkin brought matters back to just two points with three minutes to play.

But it all fell apart for Kilkenny. Power was sent off after a foul on Kelly that seemed born out of frustration.

Dublin cleared their lines and more uncharacteristic Kilkenny scalping meant that, fittingly, O’Callaghan was allowed close matters out with a free from distance.

Henry Shefflin, Michael Fennelly and Paul Murphy will not be fit to feature for Kilkenny against Tipperary in Nowlan Park next Saturday, as Dublin report a clean bill of health for their fifth weekend of hurling in a row against a rested Galway.

It’s like no hurling championship we’ve experienced for a very long time.