Relaxed Jack McCaffrey taking every challenge in his stride 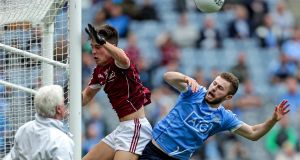 Jack McCaffrey is denied a goal by Galway’s Sean Kelly during the semi-final at Croke Park. Photograph: Laszlo Geczo/Inpho

Bernard Brogan beckons Jack McCaffrey over for a quick word. Monday is the Brogan show in Croke Park. Up at corporate level, as commercial director of Legacy consultants, promoting the Fexco Asian Gaelic Games, rather than down below where McCaffrey ruled the previous Saturday evening during the dismantling of Galway.

The pair of them are medical marvels to mortals having come out the other side of cruciate tears. That Brogan is available for selection at all after presenting his 34-year-old body not six months after the footballer’s curse is borderline miracle.

And still, like Diarmuid Connolly in 2017, Jim Gavin’s head cannot be turned by the four-time All Star. Only a blood injury to Mark Schutte granted him four minutes against Roscommon. This is the ruthless world where these men choose to exist.

Only the inner sanctum would know.

“He’s been such a good man to have around, even while he was not on the field and doing his own stuff, he’s just so well respected by everyone. He’s been a real leader for us in a very different way this year and it’s great now to have him back training away as well, so it’s been pretty phenomenal.”

Enough about injuries (well, after McCaffrey’s story about returning for Clontarf against Fingallians and that terrible feeling that his super powers had forsaken him).

“I came on at half-time and I was just brutal. I was really upset. I’d been so excited and it’s always in the back of your head, thinking that you’ll come back and score 3-6 or something and it’d just be great and it did not happen like that at all.

“Paul Flynn ran amok,” McCaffrey recalled, of another multi-decorated Dubliner who has been consigned to a bit part this summer.

The parades around Croke Park are the coolest thing ever. I just feel like a child going around

McCaffrey was deflated, until the nameless cloaked him in confidence.

“We have some great guys involved with the management team who kind of had a chat with me and we got through it alright.”

This could be Gary Keegan or Bernard Dunne, perhaps it was Jason Sherlock or Gavin himself. Maybe another unknown walking quietly in the shadow of this group. Suffice to say, McCaffrey is doing fine despite pulling up lame in the early exchanges of last September’s All-Ireland final. Next we saw of him was at the winners banquet, all smiles and grins, then he disappeared.

Last Saturday evening was as good as he’s ever been – teleporting past players with electric pace intact, distributing from boot and hand with slicing accuracy to create important scores, all the while embarking on a new career in Our Lady of Lourdes, Drogheda.

“Out the gap, paying taxes and all that kind of craic,” said Dr J McCaffrey. “I’m working with the paediatric team up there for the first three months and then you kind of rotate around.”

The interview runs smooth, like watching him prepare, all smiles and grins, plucking people from the crowd.

“The parades around Croke Park are the coolest thing ever. I just feel like a child going around. It was a really good occasion, really enjoyable and obviously you get the win and you have to be happy with that.”

He leaves thousand-yard stares to Stephen Cluxton and friends.

“Everyone has found their own individual stuff that helps them perform and for me I’ve found that it’s all about being relaxed and not tense and too focused on things. Obviously it’s to a certain degree but I like to take a step back out of it and there’s other lads who are the complete opposite and are completely in the zone and that works for them. We kind of have that situation in the dressing room that everyone respects that each individual’s doing their own thing to get a performance and it seems to work out.

I think it’s the way Gaelic football has gone, that you don’t force these kind of pot shots

“It’s just trial and error, 2015 was probably when I really settled, 2013 for me was a bit of a rollercoaster. I was still quite young and then in 2014 I didn’t have a particularly good year and then it was probably 2015 before I happened on a solid formula for myself and I kind of stuck to it since then.”

We seek more exposure to Dublin ways, to how they play so patiently and fluidly until the almost unmissable scoring opportunity arrives.

“I think it’s the way Gaelic football has gone, that you don’t force these kind of pot shots, you try and wait until you get a Paul Mannion or whoever on the ball who you’d back to actually score. And if that takes a while that takes a while. No, it’s kind of something that’s naturally evolved in terms of the styles of teams we play against but it’s always with a goal to get a score – it’s never minding the ball for the sake of it, because that’s a bit of a dangerous game, you only invite teams on then.”