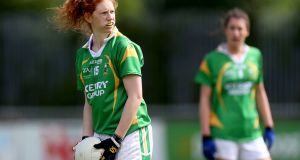 Louise Ní Mhuircheartaigh: “It’s the character of our team. We stuck with it, and we didn’t let the heads down.” Photograph: Ryan Byrne

In sweltering conditions, Sarah Houlihan and Anna Galvin scored late goals to seal a 2-15 to 2-13 win, and send Kerry through to a final clash with Waterford on July 8th.

Cork’s defeat means that their unbroken run of appearing in provincial deciders (2004-2016) is over, and Ephie Fitzgerald’s charges will attempt to retain their All-Ireland crown through the back door.

In a see-saw battle Cork came from six points down early in the second to lead by three, before Houlihan and Galvin scored the decisive goals in the 57th and 58th minutes.

“It was an absolutely fantastic game, both teams gave it everything,” said Ní Mhuircheartaigh. “We went in five points up, but we knew Cork are an outstanding team; you’d look up to them, and we knew they’d come back at us.

“When they went ahead our heads didn’t drop. Normally our heads would drop, but it’s a sign of the heart in the team, and hopefully now we can build from this and move on.

“We knew they would come back because they’re such a brilliant team, but it’s the character of our team we stuck with it, and we didn’t let the heads down. It was a fantastic game from the first minute to the 60th.”

Cork and Kerry had both suffered defeats to Waterford in the round-robin series of games, leaving Saturday’s tie as a winner-takes-all clash in the hunt for a final spot.

Ní Mhuircheartaigh agreed that Kerry, who scored all of their points from play in the first half on their way to a 0-10 to 0-5 interval lead, have improved significantly since the Waterford game.

“We needed to prove a point today, and thank God we did. Another crack at them [Waterford] in a couple of weeks – they beat Cork as well and they’re a fantastic team, and have been coming for the past few years.

“We’ll have to knuckle down, fix up the mistakes we made today, and try and improve on them before three weeks’ time.”

Meanwhile, in Ulster Caoimhe Mohan hit 1-6 from play to inspire reigning champions Monaghan to a 1-19 to 2-10 victory over neighbours Cavan in an entertaining semi-final.

It was a repeat of last year’s final, and it looked like the Breffni girls might overturn that result as they led 2-2 to 0-2 after 12 minutes, Aisling Doonan and Caitriona Smith netting their goals.

However, by the break Monaghan had that deficit wiped out as they went in level 0-9 to 2-3. Both sides had a player sin-binned in that opening period.

On the resumption, Monaghan dominated with some breathtaking football, Mohan outstanding as she kicked points off both feet.

Substitute Eileen McKenna edged Monaghan in front for the first time in the game, and when Mohan struck for her goal six minutes into the second half, Monaghan moved six points clear.

Cavan did stay in touch, and had it back to a three-point game. Yet Monaghan, with Mohan and Ciara McAnespie in stunning form, had too much firepower as all but two points of their final tally came from play.

Monaghan will meet beaten Lidl Division 1 finalists Donegal in the final, as Cavan head for the qualifiers.

In the Ulster intermediate championship, Derry came through an epic encounter to seal a final clash with Fermanagh on July 2nd. They ran out 5-15 to 5-9 semi-final winners against Antrim after extra time.

There was another excellent game in the Connacht intermediate championship as Roscommon edged out Sligo by just a single point, 3-16 to 1-21.