Ronan Jones has all of Meath talking, but can he stop Feely and keep bombing in behind? 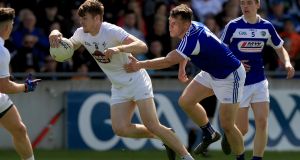 Kevin Feely in action against Laois in the Leinster quarter-final. Photograph: Inpho

When the mark came in this year many said it would have little to no impact on the game. But one man who has certainly been enjoying its benefits is Kevin Feely.

The Kildare number eight is lean and athletic, with a good rise and soft hands. The mark rewards him for fully committing to the catch at its highest point, and for working the full width of the pitch. He knows that, regardless of being suffocated by a burly opposite number, or landing on his knees; the mark rewards him with possession once he holds on.

During the league he ruled the skies as Kildare topped Division Two, particularly against Meath and Down. Against Laois in the Leinster quarter-final win earlier this month, he faced top competitors in Brendan Quigley, Colm Begley and John O’Loughlin.

He still won marks from two of the five kickouts he competed for. Both spectacular fetches. While he was unlucky not to win another for a catch via a juggle. He palmed another down to himself on the wing, and broke the other. Kildare won all of their own kickouts against Laois, with Feely’s workhorse partner at No 9, Tommy Moolick, also dominant. The duo are both 24, so safe to say the Kildare engine room is in good hands for the next while.

Laois kicked away from the pair, and went for O’Loughlin in the half forward line with their restarts. That became predictable and Kildare soon started winning knock downs.

Against Louth, Meath goalkeeper Paddy O’Rourke opted to go long, and relatively central for 75 per cent of his kick-outs. A tactic he will have to rethink against Kildare in Saturday’s Leinster semi-final.

He also looked to kick past the midfielders, positioned between halfway and their own 45, into the open space beyond them. The half forwards ran into the vacant space and gathered, but will the Kildare middle eight be dragged about? Or hold their zones, and pluck the gargantuan O'Rourke restarts for leisure.

In the first half against Louth, Meath kicked six of their seven restarts long, they won just 50 per cent of the contests.

Feely and Moolick will be licking their fingers, and broadening their shoulders at the thoughts.

Against Laois, Feely had an incredible 55 involvements, and 45 of those were with ball in hand. He kicked frees with both feet, he had shots from play, he conducted from the 45 via foot and hand. He was a link man in the centre back zone. He was an option out wide, he attacked and he defended.

Feely returned from England at the start of last season, after pursuing a professional soccer career with Charlton Ath, Carlisle Utd, AFC Wimbledon and Newport County.

Despite often being deployed as a full back during his time at DCU (for his All-Ireland fresher winning team and the 2016 Sigerson Cup runners-up), Feely has always been capable of kicking scores.

Following Neil Flynn’s injury during the league he was handed free-taking responsibilities, and is kicking them off both feet. He scored two against Laois last time out. During the league he managed 0-21 in seven midfield starts (and one substitute appearance). Of that, 0-15 came from frees while 0-6 came from play.

His in-play scores per game average is up 43 per cent on last season’s league campaign, where he only managed 0-3 in his first full season back for Cian O’Neill’s team.

One of the crucial battles on Saturday then will be between Meath’s Ronan Jones and Feely, the two midfielders are bright prospects. Yet between them they have still made only six championship appearances to date.

Feely was to the fore as Athy bridged a 24-year-gap by winning the Kildare senior title in 2011, and was also at midfield as they again reached the final two years ago.

He started at midfield in three of the Lilywhites’ four 2016 championship encounters. He missed out on the Leinster semi-final loss to Westmeath through injury, but was back again for the start of the 2017 campaign against Laois.

The dynamic Jones only turned 20 last February. He made his first start in the quarter-final win over Louth, having come off the bench for the final quarter of last year’s semi-final defeat to Dublin. In the meantime he spent much time nursing a shoulder injury.

His performance in Parnell Park against Louth has left Meath fans excited for the future again. Jones doesn’t possess the height of his Kildare counterparts, but on the ground he is fast, physical, direct, and above all a really good footballer.

The Dunboyne man, a club mate of manager Andy McEntee, had 36 involvements against the Wee County. He had 22 possessions, and on 10 of those occasions he carried the ball and took on his man. He is direct. He had a shot on goal, kicked a great point, made a big turnover, had a superb mark. He is all action and injects pace and direction with every involvement.

Like much of the Meath team he thrives on the open space left between their deep-lying full forward line and the opposition 65 metre line. Graham Reilly in particular, Eamon Wallace, Cillian O’Sullivan, Bryan Menton, and young Jones are all looking to bomb into that space, either off the shoulder or chasing the dink pass.

Unlike Feely who looks to cover every action area, Jones is a front foot footballer. He spends next to no time in his own half and looks to keep things full throttle with his opponent constantly looking over their shoulder.

Feely showed against Laois, however, that he does not neglect his defensive responsibilities. With Colm Begley to keep an eye on, he had the gas to stay with the former AFL pro and limited his attacking contribution to scraps.

So it’s a massive test for Jones, stop the mark master. And get him on that back foot. Succeed, and Meath have something very special on their hands. As do Kildare.

1 The Offload: Ireland are stuck in no man’s land
2 Nicky English: Galway and Waterford face battles with fatigue in All-Ireland semis
3 Every kind of wind imaginable was against Tipperary football - and they came through
4 Ken Early: Roles have reversed for Guardiola and Mourinho
5 Tipperary and Cavan deliver two earthquakes in one day
Real news has value SUBSCRIBE

Spurs chairman Levy warns of ‘irrecoverable loss of income’ if fans don’t return 14:03
Manly Sea Eagles NRL player Keith Titmuss dies after training aged 20 11:30
Arsenal and Leeds condemn online abuse of Pépé and Alioski 11:04
All in the Game: Neil Warnock on I’m a Celebrity? 10:00
The Offload: Ireland are stuck in no man’s land 10:00
Crossword Get access to over 6,000 interactive crosswords