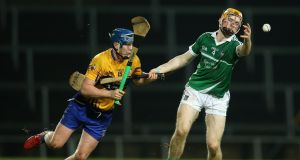 Limerick’s Richie English and Bobby Duggan of Clare in action during the Munster Senior Hurling Championship Final at the Gaelic Grounds in Limerick. Photograph: Cathal Noonan/Inpho

Davy Fitzgerald’s Clare side claimed the Munster Senior Hurling League at the Gaelic Grounds on Saturday night as they saw of Limerick by a single score in a match of high intensity.

For a game so early in the season it was a hugely entertaining affair , with the rivalry between the neighbours reflected in the fact that the throw-in was delayed for 15 minutes to allow the 4,583 spectators to enter the stadium.

Originally scheduled to be a routine league game, it was decided to play the game for the trophy after both sides qualified for the final.

And it was a game that had the edge of a decider, with no love lost during the action. Indeed three players were booked in the first half during which the teams were level on five occasions after Paul Browne and Declan Hannon had given the home side an early advantage.

But after 16 minutes it was Clare who led 0-7 to 0-6 thanks mainly to the free-taking of Colin Ryan while John Conlon and Peter Duggan had the other Clare scores.

At the interval Clare led 0-12 to 10, with Colin Ryan scoring three of his match haul of five in the opening half.

Limerick will regret not converting a number of frees in both halves and after 47 minutes it was 0-15 to 0-13 to the Banner County.

Clare went eight minutes without a score after substitute Pat Ryan pulled one back for Limerick to leave the minimum between them.

The outstanding Barry Nash tied it up at 16 points apiece but Clare brought in Cathal O’Connell after 64 minutes and he put over two precious points to earn the win.

The best goal chance of the game fell to Limerick’s substitute Kevin O’Brien but his 65th-minute effort was superbly blocked by Andrew Fahy in the Clare goal.

Limerick’s Declan Hannon top scored but missed a couple of chances from frees but overall Clare had the edge thanks mainly to the efforts of Pat O’Connor, David McInerney and Conor Cleary in defence as they kept a tight rein on Limerick’s young starlets. th

Richie English and Barry O’Connell were staunch in the heart of the Limerick defence but too much reliance was put on Hannon up front and while he impressed it was the three points by Nash that stood out.